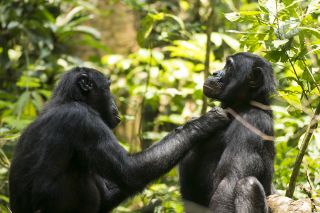 Bonobos have a decidedly low-tech solution to farsightedness, scientists have found.

Rather than donning glasses to bring objects that are near into sharper focus, aging bonobos just adjust their position, particularly when grooming their hairy pals.

Researchers noted that when older bonobos groomed their neighbors, they sat back and extended their arms farther than younger bonobos did — and they stretched their arms even more over time. In the new study, scientists identified this shift in position as an adjustment to compensate for deteriorating eyesight. [8 Humanlike Behaviors of Primates]

Scientists had previously observed this behavior in wild bonobos, though no one had investigated it closely enough to interpret it, according to study co-author Heungjin Ryu, a researcher at the Primate Research institute of Kyoto University, in Japan.

But when Ryu and other researchers witnessed this odd technique firsthand, they questioned what they might learn about the bonobos that were doing the long-reach grooming.

Age-related farsightedness in humans — also called presbyopia — is a common vision disorder that develops when the eye's lens hardens and the muscles holding it weaken, making it harder for the eye to focus light on the retina, the National Eye Institute (NEI) explains. Not all older people are affected to the same degree, but anyone over the age of 35 is at risk for developing presbyopia, the NEI added.

The study authors examined photos of bonobos as they groomed each other, evaluating 14 wild bonobos that were between 11 and 45 years old; they compared grooming distances relative to the age and sex of the bonobos doing the grooming.

They discovered that older bonobos sat farther away from the body of the bonobo they were grooming. The bonobos began to exhibit signs of farsightedness at around the age of 40, Ryu said in a statement.

For example, to focus for grooming, the 45-year-old male bonobo they named "Ten" — the oldest in his group — maintained a distance of 16 to 18 inches (40 to 45 centimeters) between his fingers and his eyes. Meanwhile, a 17-year-old female bonobo they called "Fuku" required a distance of only 2 to 4 inches (5 to 10 cm) between her fingers and eyes.

Being farsighted would not only inhibit a bonobo's ability to easily groom a neighbor, it could also affect the bonobo's social standing in the group by making that bonobo a less popular choice as a grooming partner, the authors suggested.

Few studies have shown how human aging compares to aging in other primates — particularly in our closest relatives, bonobos and chimpanzees. These findings could shed light on how scientists understand aging in the human body, and how much of the deterioration that accompanies aging is part of our evolutionary heritage, rather than our modern habits.

The findings were published online Nov. 7 in the journal Current Biology.