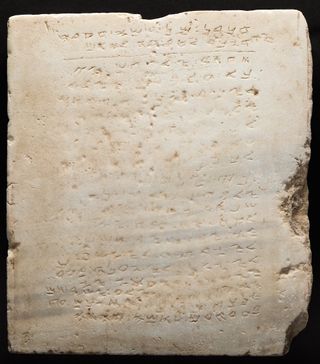 The earliest known stone ten commandments is going on auction in Beverly Hills on Nov. 16, 2016. The starting bid is $250,000, and the winner must
(Image: © Heritage Auctions)

Thou shalt not covet … unless you are coveting the world's oldest known example of a stone tablet inscribed with the Ten Commandments.

The world's oldest slab with the Decalogue will be up for auction until Nov. 16 in Beverly Hills, California. The 2-foot-long (60 centimeters), 200-lb. (90 kilograms) marble slab, dubbed the "Living Torah," is likely 1,500 to 1,700 years old, according to Heritage Autions, which is running the auction. [The Holy Land: 7 Amazing Archaeological Finds]

"There is nothing more fundamental to our shared heritage than the 10 Commandments," David Michaels, director of antiquities for Heritage Auctions, said in a statement.

People hankering for a piece of biblical history must have an opening bid of at least $250,000, and purchasers won't be able to hang the tablet over their fireplace next to pictures of their Aunt Maud. The tablet must be displayed publicly, according to the terms of the sale dictated by the Israel Antiquities Authority, which considers the slab a national treasure.

The marble slab, which contains 20 carved lines of biblical injunctions, was discovered in 1913 in Israel, after construction workers began excavating for a railroad. An Arab man set the marble in his courtyard, where decades of foot traffic wore down the inscriptions, Michaels said.

In 1943, the slab was purchased by a man named Y. Kaplan, who then brought it to noted biblical scholars, according to Michaels. Based on the shape and content of the text, scholars concluded that it was an ancient form of Samaritan, an archaic mixture of Aramaic and Hebrew, that dated to between A.D. 300 and 500. The tablets then changed hands a few more times, and were last purchased in 2005 by Rabbi Saul Deutsch for the Living Torah Museum in Brooklyn, New York, according to the auction house.

In ancient Israel, people living in Samaria, in the hills north of Jerusalem, belonged to an alternate sect of Judaism. They were persecuted, suppressed and converted by waves of Byzantine Christians, Muslims and Jews. There are still some modern-day Samaritans, who claim they are descendants of two of the lost tribes of Israel.

"Their sect has endured through the centuries alongside traditional Jews, pagans, Christians and Muslims, so the Ten Commandments stone is uniquely important to many different faiths and cultures," Michaels said.

Whereas the Dead Sea Scrolls include parchment and papyrus versions of the Decalogue that date to the first century B.C., the stone tablet versions of the Ten Commandments were created in the few hundred years after the birth of Christ. There are just four such stone tablets known today, but the others are either in fragments or located at less accessible sites in the Middle East, Michaels said.

"The Living Torah example is among the earliest of these Decalogues, and certainly the most complete," Michaels said. "It is also the only example that can be legally obtained for private ownership."

The tablets have nine of the most well-known commandments, but have swapped out "Thou shalt not take the name of the Lord thy God in vain," for an alternate injunction to raise up a temple on Mount Gerizim, which Samaritans believe was the true spot God ordained for the Temple.

The tablets likely hung over an ancient synagogue that was either destroyed by the Romans between A.D. 400 and 500, or by the Crusaders five to seven centuries later, Michaels said.