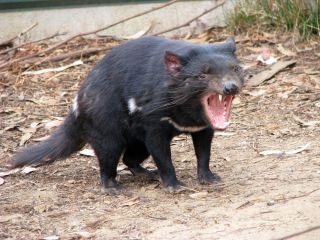 Milk from Tasmanian devils could be used in the fight against antibiotic-resistant superbugs, new research from Australia finds.

The devils are marsupials, meaning that their teensy young hop into their parents' pouches after birth to finish developing, and in a new study, researchers found that the marsupial's milk contains several powerful peptides called cathelicidins, which can act as natural antibiotics.

Humans have one cathelicidin, but Tasmanian devils have six, and their fellow marsupial opossums have 12, according to the researchers. Tests of the Tasmanian devils' cathelicidin found that the peptides were capable of killing antibiotic-resistant pathogens.

The scientists said they suspected that marsupials, because of their unusual reproductive physiology, have particularly powerful chemicals in their milk to help their young develop. [Marsupial Gallery: A Pouchful of Cute]

"Marsupials give birth to highly underdeveloped young after a very short gestation period of only up to 30 days," Emma Peel, lead author of the new study and a Ph.D. candidate in veterinary science at the University of Sydney, told Live Science in an email.

"After birth, the young continues to develop in the mother's pouch, which contains a diverse range of bacteria, some of which could be harmful," Peel said. "Given [that] the young does not have a fully functioning immune system, this led us to question how it survives within a 'dirty' pouch."

Peel and colleagues found that the antimicrobial peptides within the mother's milk and pouch were able to kill bacteria in the pouch, as well as fight against superbugs.

As antibiotic drugs have become overused, bacteria have adapted, making the drugs less effective. Superbugs, which are resistant to many of the drugs traditionally used to combat infections, are now some of the most harmful bacteria known to humans.

Lab tests showed that the peptides in Tasmanian devils' milk are effective against superbugs from the groups Staphylococcus aureus (MRSA) and Enterococci.

"Tasmanian devil peptides highlight the potential of marsupials to provide new alternatives to antibiotics in the future," Peel said. "Sequencing the genomes of more marsupials will allow us to identify and explore the antibacterial activity of antimicrobial peptides in other marsupials."

The research is still in its early stages, and further development is needed before the tests can move beyond lab dishes, Peel said. It is also possible that with further research, scientists will find other applications for the milk peptides, she said.

"As yet, we haven't explored peptide functions other than killing bacteria, but perhaps Tasmanian devil peptides could be a superfood in the future," Peel said.

The study was published (Oct. 11) in the journal Scientific Reports.