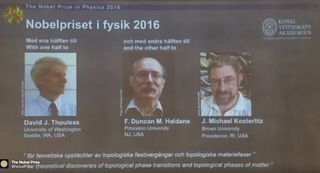 The Nobel Prize in physics went to three physicists who studied matter at the smallest scales and the coldest temperatures, which could lead to new materials and insights into phenomena such as superconductivity.

All three worked on unusual states of matter; Kosterlitz and Thouless studied the theoretical properties of very thin films, essentially 2D materials. Haldane looked at chains of atom-size magnets. [Nobel Prize 2016: Here Are the Winners (and What They Achieved)]

They used the mathematics of topology to explain why superconductivity appears and disappears when it does. Topology is the mathematical study of processes that occur in discrete steps. More formally, it's the study of shapes that can be transformed without breaking them — like the transformation of a doughnut into a straw. The steps in topology come from the fact that a doughnut can have one hole, or two (like a straw), but not one and a half.

Kosterlitz and Thouless were interested in what happens when you cool a 2D film of matter to near absolute zero. Their calculations showed that it was possible for such a material to conduct electricity without resistance, turning into a superconductor, something that scientists thought impossible. Paul Coxon, a research associate in the Materials Chemistry Group at the University of Cambridge, said that even at near absolute zero, "there's always some minor fluctuation that disturbs the order." That disruption should prevent superconductivity from happening, he added.

Or that's what scientists thought. But calculations by Kosterlitz and Thouless showed that it did not prevent superconductivity, and later experiments confirmed they were correct. The reason was related to the mathematics of topology. In 2D material, little whirlpools called vortices form pairs as the temperature drops, and the material becomes superconducting, Coxon said.

When you raise the temperature, the vortices separate and go their separate ways.  The separation creates shapes that are one-holed as opposed to two-holed (vortices have two openings), like breaking up a two-holed doughnut into two one-holed doughnuts, and the  material loses its superconductivity. The transition from superconducting to non-superconducting in such films is known as the KT threshold, for its discoverers, according to a release from the Nobel committee.

Later, Thouless studied the Quantum Hall Effect. Ordinarily, if you put a magnet perpendicular to an electric current, the voltage will change. The Quantum Hall Effect is similar, except that the voltage change can happen only in certain increments. Thouless found that the mathematics of topology explained the phenomenon. Haldane, meanwhile, showed that chains of atomic magnets can behave in a similar fashion.

Their discoveries could lead to new materials, though that is still in the future. "This has implications for superconducting materials," Coxon said, "but that's still some way off."

Coxon added that the choice of work for the Nobel Prize was a surprise, as, like many in the physics community, he thought the prize would go to the scientists who observed gravitational waves using the Laser Interferometer Gravitational-Wave Observatory (LIGO). "Everyone had half-written stories on LIGO, and then this comes out of the blue."