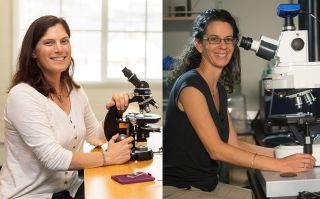 Both biologist honorees hail from the California Institute of Technology (Caltech): Dianne Newman is a microbiologist and a professor of biology and geobiology with the Division of Biology and Biological Engineering; and honoree Victoria Orphan is a geobiologist and a professor of environmental science and geobiology with the Division of Geological and Planetary Sciences.

The MacArthur "Class of 2016" list of 23 fellows represents exceptional achievements in the sciences and arts, as well as in the advancement of human rights and advocacy for social change. [Genius: Can Anyone Be One?]

Newman studies microbes — how they evolved from their earliest days on Earth, how they interact with their habitats, and how they have adapted to live in diverse environments, not just on the planet, but also inside humans, according to a MacArthur Foundation statement.

By researching the biology of ancient bacteria, Newman has discovered clues about how modern microbial communities live, and how their lives can affect human health. Her investigations of bacterial adaptations to oxygen-poor environments could inform scientists' understanding of harmful microbes that multiply and thrive in the human body, such as a particular type of drug-resistant bacteria that grows in the lungs of people affected by cystic fibrosis.

Orphan also works with microbes, focusing on those that inhabit extreme environments, such as deep-sea organisms that consume methane — a greenhouse gas — rather than oxygen to survive. The MacArthur Foundation statement described these types of microbes as extremely difficult to grow and study in a lab, explaining that Orphan had pioneered methods to enable their analysis, not only as individual cells but in their interactions with other types of microorganisms that share their habitats.

Unraveling the mechanisms used by these bacteria in the ocean as they process methane could shed light on the complex interplay between Earth's oceans and its climate, and could play a critical role in determining new strategies for addressing climate change.

Other MacArthur fellows this year include innovators in medicine and chemistry as well as historians, computer scientists, writers and visual artists.

Between 20 and 30 fellows are selected by the MacArthur Foundation each year and receive a no-strings-attached grant in the amount of $625,000, to assist them in the pursuit of their creative and demonstrably important work with no further obligations expected, according to the foundation's website.