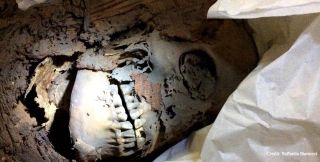 An international team of researchers has identified hundreds of proteins in skin and muscle samples from 4,200-year-old Egyptian mummies, finding signs of diseases that may have caused their death.

Published in the journal Philosophical Transaction of the Royal Society A, the groundbreaking study shows that proteins isolated from ancient mummified tissue can reveal inflammation, immune response and possibly cancer.

The researchers collected four skin samples and one muscle biopsy from three mummies stored in the Egyptian Museum in Turin, Italy.

Dating back to the First Intermediate period (about 2181–2055 B.C.), the mummies were excavated in cemeteries at Assiut and Gebelein between 1911 and 1920 by an Italian archaeological mission led by Ernesto Schiaparelli.

The Assiut mummies, a female known as Khepeshet and a male known as Idi, came from elite burials and were interred, with grave goods, in sealed and decorated wooden coffins.

In contrast, the mummy from Gebelein, an unknown adult individual, was buried in a coffin made out of a hollowed out tree trunk.

"All these mummies are in poor condition, but that is what made them perfect for retrieving biopsies without causing further damage," Jana Jones, from the Department of Ancient History at Macquarie University, Australia, told Discovery News.

Analysis showed that all five samples contained large numbers of collagens and keratins, confirming previous studies that identified these proteins as very long-lived.

Overall, the researchers identified more than 230 proteins in the 4,200-year-old samples, finding evidence for inflammation, infection and possible cancer.

Jones and colleagues Paul Haynes and others from the Department of Chemistry and Biomolecular Sciences, Macquarie University, Raffaella Bianucci, at the Legal Medicine Section of the University of Turin, Italy and Dong Hoon Shin, at the National University College of Medicine in Seoul, South Korea, estimate that any proteins observed at higher abundance in mummified samples of that age must have been expressed at relatively high levels in the original tissue.

"Using that approach, we have been able to show that many of the proteins still present in these samples are linked to inflammation and immune response," the researchers wrote.

Analysis of skin tissue from the mummy known as Khepeshet identified a protein signature indicative of a severe immune response.

"A subset of those proteins were strongly linked to bacterial infection in the lungs," Paul Haynes said.

He noted there is a strong possibility that Khepeshet was suffering from a bacterial pulmonary infection, such as tuberculosis.

"This is something you could point to as a possible cause of death," Haynes said.

Most likely, the mummy known as Idi was also suffering from a life-threatening disease.

In the muscle sample in particular, the researchers found two proteins, DMBT-1, which functions as a tumor suppressor, and transglutaminase.

Haynes explained that increased abundance of both DMBT-1 and transglutaminase is generally correlated with pancreatic cancer progression.

"This allows us to speculate that Idi may also have been suffering from pancreatic, or some other cancer," Haynes said.

Few proteins were identified for the third mummy, so the researchers were unable to find details about the cause of death.

"The remains were interred in a hollowed out log rather than a sealed coffin. The mummy would have been exposed to the elements over time and this may have caused protein degradation," Jones said.

Although little is known about the health of the population in this period, it is no mystery that food and water shortages weaken the immune system, paving the way to infectious diseases such as malaria, tuberculosis, visceral leishmaniasis and other parasitic intestinal infections.

Groups affected by these chronic conditions are at increased risk of contracting cholera, typhoid fever and acute respiratory infections.

"Our study provides a historical context for medical conditions that are still found in the modern world," Jones said.