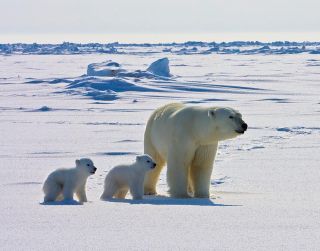 An adult female polar bear and her two cubs travel across the sea ice of the Arctic Ocean north of the Alaska coast.
(Image: © Mike Lockhart, USGS)

Five meteorologists surrounded by polar bears at a research station on a remote island in high-Arctic Russia have been rescued, according to the Guardian. A Russian research vessel happened to be close by and has arrived on scene, supplying dogs and flares that have since scared the polar bears away from the research facility.

The scientists had been trapped in their facility by a pack of polar bears that had staked out the area.

According to the Russian news agency TASS, approximately ten adult bears, along with some cubs, were stalking the grounds around the Izvestia CEC weather station, on the Troynoy island in the Kara Sea, about 93 miles (150 kilometers) off the coast of Siberia.

RELATED: Are Polar Bears Saving Themselves?

The researchers were trapped at the site for two weeks, NBC News reported. Their only defense against the enormous creatures was the used of flares to frighten the large, potentially deadly, animals. But their flare supply had run out, and the researchers were forced indoors.

It was originally thought that help might not reach the scientists for another month, when a scheduled supply boat would arrive.

TASS reported the bears were so close that some of them were sleeping under the windows of the research facility.

"The bears live in the Arctic, you know. We can't ban them from hanging around," the station's supervisor told NBC.

TASS noted that polar bear hunting has been banned in Russia for more than 50 years, due to the animal's worldwide endangered status. Russia's Minister of Natural Resources and Environment, Sergey Donskoy, ordered that every measure possible be adopted to protect both the bears and the scientists.

The scientists had halted all outdoor observations. They were stocked for work in year-long shifts, according to NBC, and were not in any immediate peril.

"Things like this have happened before on the Troynoy island because bears inhabit the area and people work there," Vassiliy Shevchenko, the head of the Sevgidromet State Monitoring Network, which owns the weather station, told TASS. "At the end of October, or in the beginning of November the near-shore waters will freeze and the bears will leave the island in search for food," Shevchenko said.