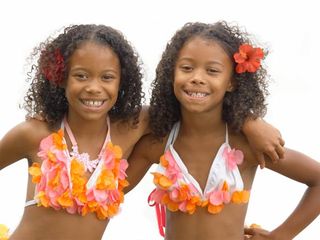 Identical twins, which occur when a fertilized egg splits into two, often look like spitting images of each other.
(Image: © Stockxpert.)

Scientists are baffled over why as many as 230 or more sets of twins live in an Indian village of just 15,000 people, according to news reports out today.

The village in North Kerala, India, reportedly has four times more twins than would be expected.

The deluge of doubles remains a mystery, with one doctor suggesting something in the water is the root, according to Reuters. But it could be a sign of the times, as multiple births at least in the United States have skyrocketed over the past few decades, said James Airoldi, Director of Obstetrics at St. Luke's Hospital and Health Network in Pennsylvania.

The number of twins born in the Unites States increased by 65 percent between 1980 and 2003, and the number of higher-order multiples (triplets or more) has jumped four-fold during that time, according to the National Center for Health Statistics. Today, more than 3 percent of all babies born in the United States are multiples, with most being twins.

The causes range from increased use of fertility drugs and other artificial fertility methods to an increase in pregnancies among older women, who have a higher probability of having multiples.

Under natural conditions (sans a fertility boost), women have about a 1.5 percent chance of having a pregnancy with more than one baby, according to Penn Medicine. Yet the chances of having twins with the use of fertility treatments can be as high as 25 percent, according to the web site of pediatrician Dr. Vincent Iannelli.

Here are some other methods for conceiving twins that have been bandied about yet not scientifically proven:

Two studies have suggested other things that could affect twin rates:

Twins are classified as either identical, in which one fertilized egg splits and develops into two fetuses, or fraternal in which two eggs are fertilized by two different sperm. Worldwide, births of identical twins have remained stable, about four or five per 1,000 births, Airoldi told LiveScience. But fraternal twin births, which vary from nation to nation, have risen and are in general more common.

Like other siblings, fraternal twins share about 50 percent of their genes and so can be different sexes and generally don't look any more alike than brothers and sisters with different birthdays.

As for what's behind twin village, a local doctor, M.K. Sribiju, reportedly said some substance in the water could be the cause, perhaps fertility drugs.

To get to the bottom of the mystery, Airoldi said he would want to know whether the twins are mostly identical or fraternal. "When these twins were conceived, what was the age of the mom?" he asked.

"If you had some environmental issue that drove down their estrogen levels and made their FSH levels go up that would increase the risk of fraternal twins," Airoldi said.