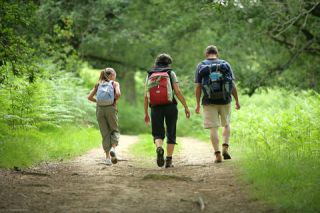 Parents today give their children more freedom at home but keep them on a tighter leash in public, a new study finds. This is the reverse of what was considered good parenting in the early half of the last century, the researcher showed.

The conclusion comes from an offbeat, qualitative study, which involved a review of 300 advice columns from Parents magazine, published between 1929 and 2006.

Examples cited in the study reveal a disciplined approach to child-rearing a couple generations ago that's all but gone today.

"Today's parents face demands that require near-constant surveillance of their children," said the study's author, Markella Rutherford of Wellesley College in Massachusetts. "Allowing children more autonomy to express themselves and their disagreements at home may well be a response to the loss of more substantial forms of children's autonomy to move through and participate in their communities on their own."

The in-home freedom could explain a stereotypical complaint by grandparents that their grandchildren are "out of control," Rutherford said.

The loss of public freedom could reflect social changes, including the current design of towns and suburbs, which focus mostly on the convenience of auto traffic, not kids. Highly-publicized child abductions also scare parents into keeping a close eye on kids, Rutherford notes.

In addition, she adds, parents bombard their children with enrichment activities that require adult supervision. That leaves less time for free play. (In fact, a recent study revealed the importance of child-like free play to a cooperative society.)

In the early 20th century, advice columns tended to promote obedience, with children listening to parents regarding diet, appearance and other personal matters.

For instance, in a 1929 article, a writer explained, "By discipline we mean the reasonable regulation and supervision of the fundamental habits of a child throughout all stages of his development and a consistent plan for having him obey simple rules such as regular meal-times, regular bed-times, training in elimination, eating what is placed before him, wearing the clothes that are provided, observing certain proprieties of conduct."

And chores of yesteryear would be considered abuse by some kids today: Through the 1950s, the household work doled out to children described in Parents included cleaning, shopping, meal preparation, furniture rearranging, furnace maintenance, automobile maintenance and nursing of sick family members.

While tightening the leashes at home, parents often gave their kids free rein outside, allowing them to play sports, ride bikes, buses and subways all over town, and even hitch rides.

By the second half of the century through today, advice in Parents has increasingly recommended allowing children to express themselves freely, even if that means defying and arguing with parents.

A 1940s article included this advice: "Don't push too hard; don't rush the child into accepting something new before he himself shows readiness. This principle should be followed as soon as the baby is born."

In a 1996 issue of the magazine, a mother wrote, "If I told my daughter to go outside and shovel the driveway before school, she'd laugh in disbelief."

The magazine has lately recommended defiant children be met with more choices and independence. A 2006 article suggested, "Provide choices. First, let your child know you understand why she’s angry … then, give her some control by letting her make a decision."

In the 1960s, '70s and '80s, descriptions of children's household chores all but disappear and instead the focus is placed on schoolwork, Rutherford found.

The results are detailed online in the journal Qualitative Sociology.