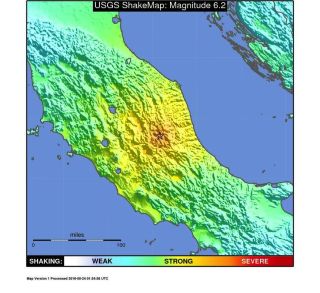 The 6.2-magnitude earthquake that rocked central Italy this morning (Aug. 24), killing dozens and demolishing an entire village, occurred in a region that is "geologically complex," according to the U.S. Geological Survey (USGS).

The main quake occurred along a fault in the Central Apennines mountain range, which runs from the Gulf of Taranto to the southern edge of the Po basin in northern Italy, according to the USGS. [Image Gallery: This Millennium's Destructive Earthquakes]

"This region is tectonically and geologically complex," the USGS said. There, the Adria micro-plate dives beneath (or subducts) the Appenines from east to west, while the Eurasia and Africa tectonic plates collide in the region, something that is also responsible for building the Alpine mountain belt to the north.

"At the location of the earthquake, the Eurasia plate moves toward the northeast with respect to Africa at a rate of approximately 24 mm/year," the USGS noted.

The central Apennine region is no stranger to earth shaking. In September 1997, a magnitude-6.0 temblor rocked an area about 31 miles (50 km) north-northwest of today's event, killing 11 people, injuring more than 100 and destroying some 80,000 homes, according to the USGS.

And perhaps the most well-known, and devastating, event in the region occurred in April 2009 when a 6.3-magnitude earthquake struck near the town of L'Aquila. In that disaster, at least 295 people were killed and more than 1,000 were injured. The main L'Aquila quake was followed by intense aftershocks. (Six scientists were convicted of manslaughter in 2012 for giving the public the false impression that there was nothing to fear from the tremors that had rocked the area for months prior to the major event.)

The largest recorded earthquake nearby occurred on Jan. 13, 1915, when a magnitude-6.7 quake killed approximately 32,000 people, according to the USGS.