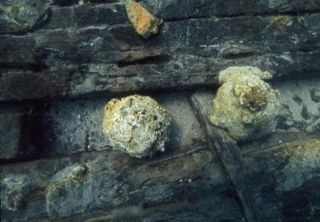 Long before the Navy used torpedoes, rockets and nuclear missiles to fire at the enemy, ship captains relied on more blunt weapons — cannonballs.

But how effective were cannonballs at sinking battleships? New research shows that cannon fire could have brought down at least one battleship, a recently discovered 19th-century warship that sank off the coast of Acre, Israel.

The ship's oak hull was unusually thick, leading researchers to question the possibility of cannonball penetration. Experimental firings of cannons at replicas of wooden warships have been carried out in other countries, but due to the cost and complexity of such experiments, they have been few and far between. In general, they were only firing demonstrations, and scientific data has not always been obtained. So it was still hard to tell for sure whether the cannonballs found in the wreck off the coast of Acre would have been capable of sinking this particular ship.

University of Haifa's Yaacov Kahanov, who studies maritime civilizations and underwater archaeology, developed a unique model along with his colleagues that enabled firing experiments to be carried out on a reduced scale, thereby reducing costs, and enabling controlled, measured and documented experimentation. Five scale models of the ship's hull, based on the archaeological findings, were constructed and fired at using an experimental gun to shoot steel balls at 225-1,100 mph (100-500 meters per second), modeling the cannon fire of the 19th century.

Despite the hull's strength, cannonballs penetrated it even at the lowest velocities.

The lower the velocity, the more energy was absorbed in causing damage to the hull, and the more the wood splintered, which would have caused more harm to the ship's personnel. The results of this experiment, Kahanov said, are of much significance to the study of the vessel and to the study of naval battles in this period.

Kahanov's colleagues on the analysis included additional researchers from the University of Haifa in Israel and from Rafael Advanced Defense Systems Ltd., a weapons developer for the Israel Defense Forces.