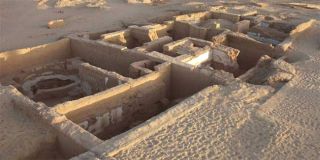 Clues found in a schoolroom adjacent to this upper-class house have shifted historians' concept of education in ancient Egypt. The site is Amheida, in the Dakhleh Oasis of Egypt's western desert.
(Image: © Amheida Project, NYU)

A trench that was cut through collapsed mud bricks and the compacted debris of buildings leveled centuries ago is revealing a dusty scene of roof-topped streets in ancient Amheida, a city marooned on an oasis deep in Egypt’s western desert. The latest in a chain of archaeological discoveries in a site that dates back at least 5,000 years, the covered streets are a glimpse into rural life under the Egyptian sun. At Amheida, archaeologists led by Roger Bagnall at New York University have sifted through the remains of a settlement far removed from the thoroughfares of the Nile Valley. The site is in the Dakhleh Oasis, 500 miles (800 kilometers) from Cairo and 185 miles (300 kilometers) from Luxor, a religious and political hub of ancient Egypt. The archaeological work has yielded a treasure trove of art and writing. Through this rural lens, archaeologists are shifting their notions of education in ancient Egypt during the Greek and Roman empires. And they have noticed deep connections between powerful central governments and the outposts in the oases.  Bagnall described the latest discoveries at a conference in Manhattan last month. First glimmer of Egyptian culture The Dakhleh Oasis stretches several hundred square miles below a barren escarpment, hedged by the dunes of the eastern Sahara that roll to its edges. The sand contrasts with the farms and the cattle-grazed meadows within. Wine, olives and dates remain important to the economy for the 75,000 residents of the oasis today. People settled in Dakhleh at least 5,000 years ago during the Neolithic period, the twilight of the Stone Age as agriculture began to catch on. At that time, the climate was wetter and residents were surrounded not by a desert, but a savanna. Bagnall suspects that Egypt's first farmers may have worked in the oasis before agriculture arrived in the Nile Valley. “They may well have contributed something to the development of Egypt before the time of the pharaohs,” Bagnall said. The early settlers of the oasis cultivated figs, dates and, later, olive groves and littered the site with pits. They were expert vintners, as well, likely producing finer wines than those available in the Nile Valley, in part because they could control the irrigation. Until the 19th century, those who lived in the oases may also have been the sole producers of cotton in the Roman period, a luxury at the time. “They were always, in some sense, peripheral or marginal,” Bagnall said. “But they were important sources of things people couldn't produce in the [Nile] Valley.” By the time the Greeks and then the Romans conquered the region, excavated statues and paintings suggest that Amheida followed the dominant culture in lockstep. In spite of their geographic isolation, they were fully integrated in the Roman world, Bagnall said, displaying the same art and mythology found throughout the Roman Empire. The surprising quality of education Scholars have thought that schools in Roman Egypt were chintzy affairs, often with just one teacher who held forth to a handful of students and charged their parents for his effort. “I always laugh because they were exactly like the teachers now. They were kind of looked down upon.” said Raffaella Cribiore, a classics professor at Columbia University in New York. Today, like then, teachers are paid little, she explained. But the denigration of the profession cut even deeper centuries ago. “If someone said your father is a teacher, it was a common slur, it was really an offense,” she said. The school room that archaeologists uncovered at Amheida lent a different perspective. Divided into three rooms lined with benches for more than 50 students, it more closely resembled today's formal institutions. Students were segregated by subject and age,  and the teacher’s lessons were scrawled on the walls, which were treated like blackboards at the time. What remains of that writing has caught Cribiorre’s attention.  "There you have a poem written on the wall in the column in red ink. The poem speaks of rhetoric. It says, 'come on, get up, get to work,'" she explained. "It's encouragement from a teacher of rhetoric to his students. But it's all poetry. In Greek." Scholars had thought that rhetoric, not poetry, was taught in Roman Egyptian schools. The schools churned out politicians and bureaucrats, aristocratic young men destined for leadership. Prior to the find, Cribiore had suspected that they might also have learned poetry, and this confirmed it. The teacher had written his lessons in verse, showing that schools from the period were more formal than once believed. Brasso and sagging stairs The archaeologists at Amheida apply dental tools,Brasso metal polish and gentler chemicals to hundreds of Roman coins and sift through millions of potsherds, sorting and drawing some of them for records. "You can learn a lot from pottery," said Jen Thum, an undergraduate student from Barnard College who accompanied Bagnall early this year. They can help date a site, for example, or a concentration of them in one spot is a telltale sign of an ancient kitchen. Like many of the oasis' residents, Thum lived in a mud-brick house, ate variants of falafel called tameya and watch televised soccer games. The walls of her borrowed home cracked and the earthen staircase sagged during an especially intense rain storm this year. It's a quirk of excavation in the rural oases. Bagnall and his team continue to piece together this oblique perspective on ancient Egypt. Still on the docket are the hunt for a church, and the exploration of large, buried cemeteries.