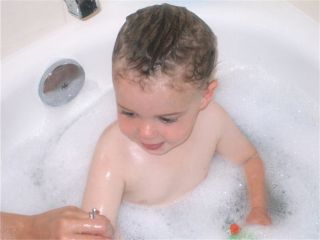 While bath time can be fun for kids, the tub is also a hazard, with slips and falls injuring thousands of youngsters each year.
(Image: © MediaSource.)

Slips and falls in the tub and shower are sending injured U.S. kids to the emergency room at a surprising rate — 120 daily — with most injuries occurring in children under 4 years old, a new study finds.

The research, which will be published in the August issue of the journal Pediatrics, adds another worry to parents' list of household dangers.

Recent research has shown falling furniture harms more than 200,000 children each year, while computer equipment also poses a hazard to kids. Last year, a study revealed a high number of injuries from toilet seats falling on the penises of unsuspecting toddlers.

The new study is based on a nationally representative survey of bathtub- and shower-related injuries to children 18 years and younger in the United States. An average of more than 43,000 kids are treated in hospital emergency departments annually for these types of injuries, according to the study.

"That is because young children, the ones typically injured in bathtubs and showers, they tend to topple forward," said study team member Dr. Gary Smith, director of Center for Injury Research and Policy at Nationwide Children's Hospital in Ohio. "They have a high center of gravity, and they tend to strike their head and their face, and that ends up with injures such as lacerations."

Overall, wounds from falls make up about 80 percent of bath-related injuries, topping those caused by scalding water or submersion in the tub, the researchers say.

And in most cases, parents were watching their kids.

Smith added that "it is important to prevent them from happening by using a slip-resistant mat inside and outside the bath and shower." Other preventive measures he recommends include support bars for kids to hold onto when getting into and out of the tub and shower.