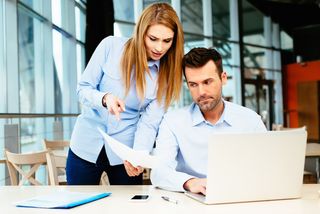 A game of pick-up basketball against someone far taller and more skilled than you may leave you feeling a bit low, but joining that person's team would probably give your self-esteem a boost, new research suggests.

That's because people automatically compare their own performance with that of others, according to the study, published today (July 20) in the journal Neuron. When they're cooperating with another person, they perceive that person's performance as a reflection on their own: A better partner makes people feel better about their own abilities, while a worse partner makes them feel incompetent, too.

During competition, the opposite happens: A skilled competitor makes people judge their own performance as worse, and a bumbling opponent makes them feel better.

The brain region responsible for this so-called "self-other mergence" in competition and cooperation is area 9, a strip of cortex that spans the frontal lobe. (Picture it right behind your forehead.) Area 9 shows up often in studies of social cognition, said study researcher Marco Wittmann, a doctoral student in cognitive neuroscience at the University of Oxford in England, so it wasn't too surprising to see that it plays a role in gauging one's performance against others. [10 Things You Didn't Know About the Brain]

"It's really a new kind of representation here that could lie at the heart of a lot of individual differences" among people, said Christian Ruff, a neuroeconomist at the University of Zurich in Switzerland who was not involved with the study.

In the study, Wittmann and his colleagues asked 24 participants to play reaction-time games while inside a functional magnetic resonance imaging (fMRI) scanner. This machine tracked blood flow and indicated which brain areas were more or less active at a given time.

The ratings allowed the researcher to gauge how the person took into account the feedback about the other player when rating himself or herself, and vice versa. [10 Things That Make Humans Special]

"The effect is relatively intuitive," Wittmann told Live Science. "In cooperation, you somehow adjust how good you think you are to your colleagues, and in competition, you do the opposite."

It's intuitive, perhaps, but also complicated, Ruff said. The study highlights how people's judgments of themselves are inextricably linked to their perceptions of others, he said.

"This is a study that highlights that neural signals representing ourselves or other people are much more complex than we previously thought, and we need to think about these signals from, perhaps, other angles," Ruff told Live Science. "We need to take the specific social context in which these signals are generated into account much, much more."

Area 9 of the brain

The fMRI data revealed that two brain regions were particularly active during these tasks. The first, the perigenual anterior cingulate cortex, is located deep in the midsection of the brain. More activity in this region correlated with rating oneself better at the reaction-time games.

In contrast, the second area, area 9, was busy during the ratings of other people, and more activity here meant a more generous assessment of the other player. Activity in area 9 also correlated with the self-other mergence effect, in which ratings of the self and others colored one another. The stronger the brain signal in area 9, Wittmann said, the stronger the self-other mergence.

The findings could mean that people just have a hard time tracking their own as well as others' performance, so the estimates tend to bleed together, Wittmann said. Or perhaps the framing of yourself in competition or in cooperation with another person bolsters the effect, he said.

Proving causality between a brain signal and a behavior is notoriously difficult with fMRI studies alone, Ruff said. For that reason, the next step in the research should be to study the effect in people with brain lesions in area 9, to see if they are less likely to take other people's performance into account when judging their own, Ruff said.

People in the study were relatively accurate and rational when making their assessments, Wittmann noted; the self-other mergence effect didn't cancel out common sense and the facts presented to the participants. Still, he said, it's an interesting look at how people make judgments when they are the subject.

"It would be interesting to see, for instance, if for depressed patients, their estimates of how well they're doing are somehow different" from how other people judge themselves," Wittmann said.