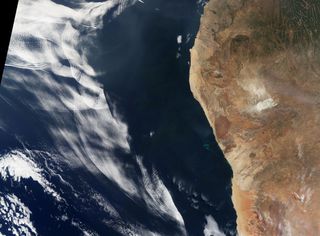 Interlacing waves of clouds decorate the sky above the coast of Angola in a new satellite image.

The image, taken June 26 by an instrument on NASA's Terra satellite, highlights the atmospheric patterns off the coast of West Africa. The clouds are called gravity waves, which form as gravity and buoyancy try to balance each other out. (Gravity waves are different than gravitational waves, which are ripples in space-time.)

According to NASA's Earth Observatory, the culprit here is dry, cool air moving out of the nighttime Namib desert and over the ocean. This cool air pushes the humid and warm ocean air up (there's the buoyancy part of the equation). As the moisture rises and condenses to form clouds, gravity pushes it back down, where it hits the rising column of dry air and gets hoisted up again. (A similar push-and-pull occurs at the ocean's surface because of the interactions of wind and gravity.)

On the day the Moderate Resolution Imaging Spectroradiometer on the Terra satellite captured this image, winds were creating gravity waves in all different directions, Bastiaan van Diedenhoven, who researches ice-containing clouds at NASA's Goddard Space Flight Center, told the Earth Observatory. The result was a complicated pattern of crisscrossing clouds curving across at least 620 miles (1,000 kilometers). These patterns are often seen off Angola and Namibia in the morning and early afternoon, van Diedenhoven told the Earth Observatory, and tend to be pushed out to sea as the day goes on.

Gravity waves may be important for commercial air travel. A study presented in 2012 at the annual meeting of the American Geophysical Union found that gravity waves can break against an aircraft just as ocean waves break against a beach, causing turbulence in otherwise clear skies.