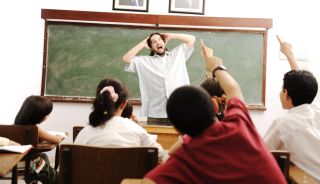 Head lice and strep throat aren’t the only things you can catch in a classroom. According to a new study from Canada, stress may be contagious, too.

Researchers found that when 4th- to 7th-grade teachers reported feeling "burned out," their students also had elevated stress levels.

The study "is the first of its kind connecting teachers' stress-related experiences to students' stress physiology in a real-life setting," the researchers wrote in their study, published today (June 27) in the journal Social Science & Medicine. [10 Scientific Tips for Raising Happy Kids]

Teacher burnout is likely the leading reason for which teachers leave the profession, according to the study. Previous research suggested that teachers who report higher levels of burnout also report having higher stress levels as well as being less effective in their classroom management and their teaching, the researchers wrote.

And while some would argue that an unruly classroom could be a source of stress for a teacher, the new study shows the opposite may also be true: A stressed-out teacher may result in stressed-out students.

To measure stress levels in students, the researchers collected saliva samples from more than 400 students ages 8 to 12 and looked at how much cortisol was in each sample. Cortisol is produced in the body in response to stress. But high cortisol levels also have been linked to learning difficulties and mental-health problems, the researchers wrote in the study.

Because cortisol levels can fluctuate throughout the day, the researchers took measurements in the morning, at midday and in the early afternoon. They also gathered information on the students' wake-up times. [How Much Sleep Does Your School-Age Child Need?]

In addition, 17 teachers ages 34 to 65 filled out surveys to measure their levels of burnout, according to the study. A higher burnout level meant that a teacher was experiencing more emotional exhaustion and depersonalization, which the researchers defined as feeling negative, irritable and cynical toward students, according to the study.

When the researchers compared the students' cortisol levels in the morning to their teachers' burnout levels, they found that the two were linked: The students whose teachers reported higher levels of burnout were more likely to have higher cortisol levels, compared with students whose teachers reported lower levels of burnout.

The students' midday and early-afternoon cortisol levels, however, were not associated with teacher burnout; however, it is unclear why, the researchers wrote.

The link between teacher burnout and student stress "suggests that stress contagion might be taking place in the classroom among students and their teachers," Eva Oberle, an assistant professor of population and public health at the University of British Columbia and the lead author of the study, said in a statement. In other words, stress may be contagious between teachers and students.

However, the study does not clearly answer whether the stress goes from teachers to students, or from students to teachers, or in both directions.

"It is unknown what came first — elevated cortisol or teacher burnout," Oberle said. "We consider the connection between student and teacher stress a cyclical problem in the classroom."