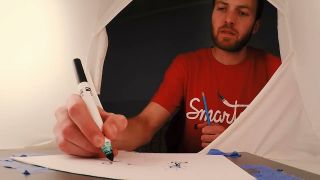 Henry Reich, creator and host of MinutePhysics, makes a rare on-camera appearance during a glimpse behind the scenes, as he produces video elements for a story about teleportation.
(Image: © Henry Reich / MinutePhysics)

Welcome to Live Science's exploration of science videos on YouTube!

In this series of articles, some of YouTube's most popular science channels take a turn in the spotlight. Their creators employ a range of techniques and styles, weaving together animation, video shot in the studio and on location, sound design, and a general curiosity for the world around them, to capture and convey the peculiar and fascinating details of their unique science stories.

You don't need to be an Einstein to be intrigued by physics — the science of how energy and matter interact. Physics explains actions as mundane as skipping a stone across a pond's surface, shaping a coffee stain, or performing a sequence of Kung Fu moves. It enables scientists to ponder the existence of wormholes, parallel worlds and dark energy.

And on the YouTube channel MinutePhysics, host and creator Henry Reich uses time-lapse footage of animations that he creates himself, in order to illustrate and explain some of these highly complex concepts. "If you can't explain it, you don't understand it well enough," Reich writes on his YouTube page; and these are words that Reich — as a science communicator — has clearly taken to heart.

While Reich narrates the videos, he rarely appears in them — except for his hands, which are frequently visible as he draws.

Some videos focus on defining fairly straightforward concepts, like the physics of car crashes, why the sky is dark at night and how airplanes fly.

A recent video tackled a conundrum known as the grandfather paradox, which is a staple of numerous science-fiction plotlines — if you traveled backward in time and murdered your grandfather, would you cease to exist?

Reich's art style is no-frills — stick figures and objects are rapidly sketched with a minimum of detail, accented sparingly with scant dabs of color. And they take shape at a pace that matches that of Reich's explanations, which move steadily forward and keep jargon to a minimum.

The experience is educational, entertaining and very accessible — even if you're no rocket scientist.