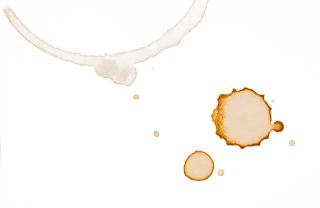 Coffee stains may seem mundane, but they are actually an interesting quirk of physics.

Now researchers have discovered a surprising twist that changes our understanding of how these stains form. It turns out that liquids, such as coffee, that are made up of spherical particles dry differently than liquids with more oblong particles, scientists have found.

In the case of coffee, each particle, or clump of molecules, is roughly a micrometer (one millionth of a meter) wide, which is about 10,000 times larger than individual coffee molecules, researchers said.

As a drop of coffee dries, liquid evaporates more efficiently from the drop's thinner edges. Liquid in the middle then flows outward to replenish the edges, carrying the suspended solids with it. These are then left behind in a ring around the edges of the drop when all the water has evaporated, leaving the telltale dark halo at the drop's edge, with a more translucent center to the stain. [Video - Liquid Drop Defies Gravity]

Researchers assumed that particles that were oblong, rather than spherical, would behave similarly. To their surprise, they found instead that oblong particles tend to clump together much more strongly than spherical particles. This clumping hinders the flow of liquid from the middle of a drop to the edge, thus distributing the solids more evenly as the drop dries, and leaving behind an even stain without the ring effect.

"I think people are very surprised that by just changing the shape of the particles without changing the chemistry, we're able to avoid this effect," said University of Pennsylvania graduate student Peter Yunker, who led the research.

The revelation could be of interest beyond the physics community.

"There are a lot of very elegant physics in a lot of everyday objects," Yunker told LiveScience. "There are also a lot of practical applications that come out of some very basic physics."

For example, the coffee-stain discovery could help makers of paint and ink, who often go to great lengths to prevent their products from drying unevenly without adding extra solid solvents.

"We were really interested in understanding what we can do to avoid the coffee-ring effect," Yunker said.

"In inkjet cartridges, the ink costs more than expensive champagne per volume," Yunker added. "If we can reduce the solid content in inkjet ink by a small amount, we could potentially decrease the cost by a large amount."

The finding is detailed in tomorrow's (Aug. 18) issue of the journal Nature.