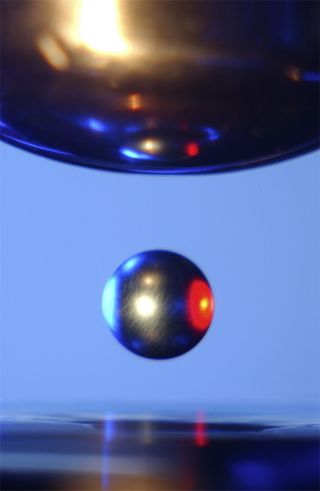 Inside a NASA Electrostatic Levitator, a ball of metal is suspended in mid-air by static electricity.
(Image: © NASA/MSFC/Emmett Given)

Physicists are building a levitation chamber to suspend a drop of liquid in mid-air and watch its atoms as it cools into glass.

The machine should help clarify the mystery of glass, which is a puzzling state where matter is more like a liquid than a solid. Physicists want to better understand what happens to the atoms in a material when it transitions from a liquid to a glass.

We often think of glass simply as the stuff that's in our windows, but it's actually a phase of matter, like a gas, a liquid or a solid. All liquids can become glasses, but some more easily than others.

"We've used glasses since 4,000 years ago in Mesopotamia, but we still don’t understand the process – how it goes from a liquid to a glass," said physicist Kenneth Kelton of Washington University in St. Louis. "It's one of the most interesting dynamical processes anywhere around."

The liquids in this study are metals – such as titanium, zirconium, nickel, platinum and their alloys (metals mixed with other elements). If cooled down quickly enough, these too can form glasses instead of solids.

The key, though, is that they must be kept out of contact with other materials – such as a container – which make it even easier to settle into a solid and more difficult to become a glass. So for this experiment, the liquid must be floating in a vacuum, not touching anything else.

That's where the levitation chamber comes in.

The $1.65 million Neutron Electrostatic Levitation Chamber (NESL) will be set up at Oak Ridge National Laboratory in Oak Ridge, Tenn. Kelton, the team leader, and his colleagues Takeshi Egami of Oak Ridge and the University of Tennessee, Alan Goldman of Iowa State University, and Xun-li Wang of Oak Ridge, hope to have the device up and running in about three years.

The chamber will use electrodes to induce an electric charge on the surface of a drop of liquid. Then an electromagnetic field will keep the drop hovering in one spot.

Another machine at Oak Ridge, called the Spallation Neutron Source, will produce beams of neutrons (neutrally charged subatomic particles found in the nuclei of atoms) to aim at the hovering drop. The researchers plan to use neutrons as a stand-in for light, to create a kind of neutron microscope to study the liquid. As the neutrons fly through the liquid drop, they can interact with the atoms in the droplet. And when the neutrons emerge on the other side of the drop, they appear in a particular pattern depending on the arrangement of atoms in the liquid.

"This, we hope, will give us information on things that have never been studied in liquids," Kelton said. "If an atom is moving in a liquid, we can tell something about that motion from the way the neutrons come through."

The metals, which exist as solids at room temperature, must be kept very hot to stay in liquid form. The researchers plan to shine laser beams on the liquid samples to keep them heated, and then adjust the power of the lasers to adjust the temperature, cooling the liquids down to glass.

The physicists hope to compare the microscopic structure of the material in these different states to help pin down just what differentiates them.

"If we look at the difference in structure from a liquid to a glass, we can see a difference, but it's very subtle," Kelton told LiveScience. "The question is, What's different?

What's in a glass?

A solid has a very organized structure where atoms are arranged in regular, repeating patterns like building blocks. This structure stays relatively stable over time. A liquid, on the other hand, is a jumble, with atoms grouped together in changing, uneven patterns.

Glass, though it seems frozen like a solid, is actually arranged much more like a liquid, and as such has the capacity to change, albeit more slowly than a liquid.

Physicists suspect that though the atoms in a glass look somewhat randomly arranged, they are actually more stuck than they seem. Perhaps most atoms are locked in place by their neighbors, and for one to move, all its surrounding atoms would also have to shift. So when glass does flow, it's only because large groups of atoms cooperate to move together.

Earlier experiments by Kelton and his team at a precursor levitation chamber showed that islands can occur where bunches of atoms group together in an ordered formation. These islands seem to interrupt the larger patterns that would form in a solid, so their presence prevents the liquid from becoming a solid, keeping it stuck in its mostly jumbled state.

But researchers don't all agree about how this works, or whether it happens in all glasses. They hope the next generation experiment will provide new insight.

Editor's Note: This story was updated to reflect the fact that window glass doesn't flow enough on a human timescale for change to be visible.