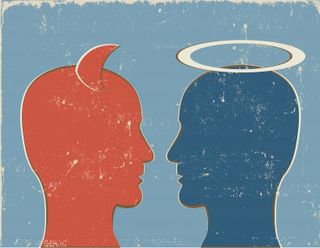 People considered saints in some aspects of their lives can slip up in other arenas, as a way of maintaining a sort of moral balance, a new study suggests.

The results could help to explain how someone well-respected by others and who touts family values, such as former Senator John Edwards, can commit adultery. (That's just part of the story for cheating politicians, whose power and feelings of invincibility can also lead them astray.)

Conversely, people who engage in immoral behaviors can surprise us when they do the equivalent of helping an elderly woman across the street.

The researchers caution, however, that the study is based on lab experiments and so further work is needed to confirm the results in the real world where measuring moral acts is more complicated.

The findings, published in the April issue of the journal Psychological Science, add to a list of reasons scientists are finding for saintly and not-so-saintly acts. Doing good makes us feel good, leads to happier marriages, and could even get us a date.

Doing bad, on the other hand, can be justified as a means to a moral end, according to a study published in 2007 in the Journal of Applied Psychology. And when we step over to the dark side, we often judge ourselves more leniently than we would a stranger who committed the same dark act, according to another recent study. The reason for such leniency: keeping a positive self-image.

The idea works kind of like a moral meter and when it gets overfilled an individual commits some immoral acts as a way of keeping their internal tank at a healthy level. The same goes for a tank whose meter reads "low" or "empty." That person, say the woman who constantly cuts corners at work or cheats on her husband, might donate big-time to a charity or help out at homeless shelter.

"Imagine a line on a plane," said lead researcher Sonya Sachdeva of Northwestern University in Illinois. "If you go above the line, you feel pressure to come back down. The only way you can come back down is either by refraining from good social behavior or by actively engaging in immoral behavior."

But rather than ruining your transmission with an overfilled tank or stalling at a light when you reach "empty," this meter basically could keep a person sane in a world where the good and the bad are tugging at you constantly.

"We can't invest all of our time and effort, and all of our money into doing good things," Northwestern study researcher Rumen Iliev told LiveScience. "We wouldn't be able to function. So we have to make these tradeoffs between being moral and being immoral."

Here's how Iliev, Sachdeva and Northwestern colleague Douglas Medin figured out the inner workings of our moral barometers.

In one experiment, nearly 50 students were split into groups, with some of the participants writing a brief essay about themselves using positive words, such as "caring," "kind," and "fair." Others had to incorporate negative words (mean, greedy and selfish) while others included neutral words, such as "book" and "keys" into their stories.

Finally, participants had the option of donating up to $10 to a charity of their choice. The negative-word storytellers donated an average of $5.30, compared with about $1 for those who wrote positive essays and $2.71 for the neutral group.

Since some participants used the negative and positive words to describe others or to relate how others thought of them, the researchers weren't sure if the results could be linked to an individual's self-worth or just overall "negative" or "positive" feelings.

To figure this out, the scientists had another group of students complete the same essay-writing task. But in this variation, each person was assigned to either write about themselves or someone else. Such moral-cleansing and moral-licensing effects occurred only when people wrote about themselves.

In a third experiment, instead of the option of donating money, participants had to decide whether to act as managers of manufacturing plants and make decisions about putting costly filters on their smokestacks.

The researchers hope to extend their research to the real world, where they speculate the phenomenon could apply in some ways.

"I think when one starts observing everyday behavior one can start seeing patterns where doing something good will actually later result in less effort in continuing some kind of moral behavior." Iliev said.