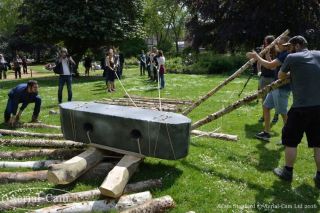 Recently, a group of students from University College London (UCL), in the United Kingdom, staged an archaeology experiment to learn how ancient peoples may have moved the stones of Stonehenge.
(Image: © Adam Stanford/Aerial Cam)

The massive megaliths at Stonehenge have fascinated scholars and tourists for centuries, but one of the most enduring mysteries about the site is how the ancient builders of the monument moved the giant stones into place — some more than 100 miles (160 kilometers) from where they were quarried.

In the Middle Ages, a legend arose that Stonehenge was built by giants on the orders of the wizard Merlin, as a tomb for British nobles who were slain by the invading Saxons. Now, a group of university students in the United Kingdom has come to grips, literally, with how the Neolithic people of Britain might have transported the huge stones over such distances. Using only rope, wood and stone tools, in front of a cheering crowd in a park in central London last month, they put their theories — and their muscles — to the test.

In an archaeological experiment that combined the public demonstration with feats of strength, dozens of students joined an effort to haul a sycamore-wood sled carrying a 1-ton stone block over a wooden trackway. The experiment took place in Gordon Square, which is located next to the University College London (UCL) Institute of Archaeology. [Stonehenge Photos: Investigating How the Mysterious Structure Was Built]

The students said that they found the task much easier than they had expected: Just 10 people were needed to haul the sled and block over the short trackway. They pulled the apparatus at a rate of around 10 feet (3 meters) every 5 seconds, which works out to a continuous hauling speed of about 1 mile per hour (1.6 km/h).

"All we can really tell from experiments like this is the minimum number of people involved," the event organizer, Barney Harris, a Ph.D. student at UCL's Institute of Archaeology, told Live Science. "My preliminary calculations led me to believe it would take slightly more people. In the event, what I thought would take 15 people, at a minimum, actually needed only 10 people."

Mysteries of the stones

In recent years, questions about the techniques and labor that were required to build Stonehenge have deepened with the revelation that the famous stone circle is just one part of a vast complex of Neolithic monumental circles made from stones and wooden posts, processional "avenues" and burial mounds.. Most have left little trace on the landscape and were discovered with the aid of modern archaeological techniques such as aerial surveys that use geomagnetic instruments and ground-penetrating radar.

In 2014, researchers identified the site where the 2-ton dolerite bluestones from Stonehenge were quarried, in the Preseli Hills of western Wales, about 140 miles (225 km) northwest of their eventual destination at Stonehenge, in Wiltshire, England. The giant "sarsen" stones, which make up the main ring of Stonehenge, weigh up to 32 tons and are made from a local sandstone that is thought to have been dragged from the Marlborough Downs, 20 miles (32 km) to the north.

Harris, who also conducts tours of Stonehenge for a company called Tours from Antiquity, said a scaled-up version of the wishbone- or Y-shaped wooden sled that was used in the recent experiment may have also been used to drag the larger sarsen stones, but over a much shorter distance than the smaller bluestones. Given the hilly terrain that the Stonehenge builders had to cover, he estimated that a group of around 20 people would have been able to transport a single 2-ton bluestone by sled from Wales.

Similar sleds are still in use today in India and Indonesia to build large stone monuments, Harris said, and the recent discovery of a Y-shaped wooden sled at a megalithic site in Japan that dates back to around 2000 B.C. shows that the technology was known in prehistoric times. [In Photos: A Walk Through Stonehenge]

"Although that's very far away from Stonehenge, at least we have some very convincing evidence that these kinds of sleds were used during prehistory, which is a lot better than we have for many other suggested techniques," Harris said.

Whatever technique was used to move the megalithic stones, Harris thinks it's unlikely the builders laid cylindrical wooden rollers in front of the stone blocks as they moved forward — an idea that has been commonly proposed.

In previous experiments, researchers have tried to move large stones with rollers, but "with absolutely terrible consequences," Harris said. They found that unless the rollers were exactly the same diameter, any larger rollers would be crushed into the ground and jam, while any skewed or misaligned rollers would quickly make the whole arrangement unstable, he added.

Harris's experiment used sawn wooden logs only as a static trackway for the sled, to prevent damage to the grass in Gordon Square, and not as rollers. Future experiments in a less sensitive location could dispense with a trackway, giving researchers a better estimate of the labor needed to move the sled and stone block directly along the ground, he said. [Stonehenge: 7 Reasons the Mysterious Monument Was Built]

Data from the latest experiment and others will eventually be used in modeling software to produce a revised estimate of the number of people and length of time it took to build Stonehenge, Harris said.

In a study conducted by the British archaeologist Richard Atkinson in 1951, the researcher estimated that it would have taken around 30 million combined hours of labor to build Stonehenge, but Harris said he expects that his research will revise that figure down "significantly."

The completed research would set the probable length of time it took to build Stonehenge in "a wider study of the time required to build the hundreds of monuments in the region, so we can contextualize its impact on the society that built it," he said.