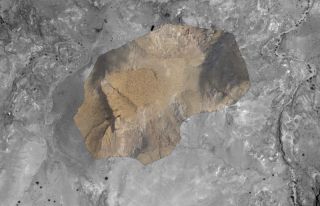 An aerial image of the mysterious rectangular feature found at Petra, which the archaeologists call "SM Platform." (UAV composite image created by I. LaBianca; S. Parcak overlaid the data on the WV-1 satellite imagery.)
(Image: © I. LaBianca / S. Parcak)

Carved into desert cliffs, the towering, ancient city of Petra can trace its origins back at least 2,000 years. It lies about 115 miles (185 kilometers) southwest of Amman, Jordan, and holds the remains of what was once a bustling metropolis, including houses, forts, temples, tombs and cisterns.

For two centuries, archaeologists have extensively studied what is left of Petra, but they continue to make new discoveries.

Recently, scientists discovered an enormous structure that had previously eluded detection. By combining data gathered by Google Earth and satellite sensors, they observed the shape of what may have once been a giant stoneplatform, located about 0.6 miles (900 m) outside Petra's city center. [In Photos: Mysterious, Giant Platform at Petra 'Hidden' in Plain Sight]

By analyzing satellite imagery taken in 2010, the researchers began their work by investigating a question: How did Petra's inhabitants — the Nabateans (also spelled Nabataeans) — change the landscape around their city? Then, the researchers looked for features that prior excavations or surveys might have missed.

Sarah Parcak, an archaeologist at the University of Alabama at Birmingham, described the sizable structure in an article co-authored by Christopher Tuttle, an archaeologist at Brown University. They published their findings online in the May issue of the journal Bulletin of the American Schools of Oriental Research.

Image sharpening applied to the satellite views of the site revealed four areas with unusual features that could represent human-made structures, the researchers reported.

Located on a plateau within one of those areas was their most significant find — a giant platform measuring about 184 feet by 161 feet (56 by 49 m), topped with a smaller platform that was fronted with columns and crossed by a stairway. Terrace walls supported the large platform's western side.

"This monumental platform has no parallels at Petra or in its hinterlands at present," the authors wrote.

The researchers selected the article's title — "Hiding in Plain Sight" — because despite the structure's impressive size and its proximity to the city center, it had remained undetected by earlier surveys, Parcak told Live Science in an email. And according to Parcak, improvements in remote-sensing technologies are what made this discovery possible.

"This feature was not visible fully on Google Earth in 2012, when we began this study, due to poor imagery coverage — it is partly visible now," Parcak said. "Only with processing the high-resolution imagery did its rectangular form become more apparent."

From the sky to the ground

Once satellites had detected the structure, it was time for the legwork. The archaeologists transferred GPS points from the images to maps, and then walked the site to make more detailed observations of the structures and artifacts in the surrounding area, photographing what they saw but not disturbing anything.

Drones captured high-resolution overhead images, and the archaeologists overlaid these photos onto the satellite images, using them as references for later fieldwork.

The structure was built by the Nabateans when Petra was at its peak, Parcak said, but how the people might have used it is unclear, and the platform's purpose might have changed over millennia.

"It probably functioned for some type of public display activity," Parcak said. "This could be cultic, political or otherwise."

Many questions remain about this unusual platform and the role it may have played in everyday Nabatean life. And according to Parcak, it's important to remember that even in archaeological sites like Petra that have been examined extensively, there is still a great deal to discover, and new technologies can reveal still-hidden mysteries.

"So much is left to find," Parcak told Live Science. "We have truly just begun the age of discovery in archaeology, which is possible primarily through the use of new technologies like satellites. We simply cannot take anything for granted."