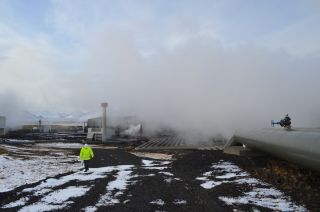 Engineers have taken a tip from Medusa, it seems. They have stared down the pesky greenhouse gas carbon dioxide and turned it to stone.

The process they used was not as easy as simply eyeballing the gas, though. Essentially, they relied on a sped-up version of natural processes to take the carbon dioxide (CO2) spewed from a power plant in Iceland and transform the gas into a solid.

This ability to capture carbon dioxide and store it indefinitely may help curb the levels of heat-trapping gases in the atmosphere and stem global warming, the researchers noted. [Changing Earth: 7 Ideas to Geoengineer Our Planet]

"We need to deal with rising carbon emissions," lead study author Juerg Matter, now an associate professor of geoengineering at the University of Southampton in the United Kingdom, said in a statement. "This is the ultimate permanent storage — turn them back to stone."

Human-caused global warming occurs mostly because of greenhouse gases, such as carbon dioxide and methane, that get poured into the air by humans burning fossil fuels for energy and other processes. These gases trap heat before it can escape out into space. Carbon dioxide is the biggest factor in this warming, scientists have said, because billions of tons of the gas are released every year and it stays in the atmosphere for long periods of time.

Ordinarily, this gas is drawn out of the atmosphere by plants, which use it for photosynthesis, and a chemical process called weathering of rocks. This process happens when carbon dioxide and other gases that dissolve in water form weak acids that then chemically react with minerals in rocks to form other solids, like clays. However, both of those uptake processes are relatively slow, and they can't keep up with human output, the study researchers noted. [The Reality of Climate Change: 10 Myths Busted]

As such, engineers and other scientists have been working on several efforts to somehow inject the carbon dioxide into the ground. For instance, carbon dioxide is pumped into the tiny holes, or pores, in sedimentary rock — the kind laid down by layers of sand, for example, on the ocean floor.

The problem is that the carbon dioxide is a gas, and tends to rise. To keep it underground requires a placing a layer of less porous rock on top of the porous rock where the gas is stored. The carbon dioxide will eventually react with the porous rock and turn into a solid, carbonate compound, but that process can take centuries, if not millennia, according to study co-authorSigurdur Gislason, research professor at the University of Iceland in Reykjavik.

A new way to hide CO2

The team, led by Juerg Matter, now an associate professor of geoengineering at the University of Southampton, tried something different. The researchers took the carbon dioxide emitted by a power plant in Iceland, pressurized it to 25 atmospheres. They then pumped the CO2 into a borehole that was filled with water, dissolving the gas and making something like seltzer water. The mixture was then pumped into a layer of porous, volcanic rock located some 1,640 feet (500 meters) below the surface of the ground. The rock reacted with the mixture and formed carbonate compounds.

Essentially, the researchers sped up the weathering of rocks, Gislason told Live Science. Here's how it works: The carbon dioxide in the water forms carbonic acid, which dissolves the basalts and makes them more porous. Meanwhile, the carbon and oxygen from the CO2 make new compounds, largely magnesium, iron and calcium carbonates, which are solids that can't go anywhere. "Calcium, iron, magnesium can all form carbonates," Gislason said.

The process is very like what happens naturally, except that when stone — either as mountains or stone buildings – weathers, it happens as it rains, and rainwater only converts a small amount of carbon at a time. In addition, because the CO2 added to the water is under a lot more pressure than it is in the atmosphere, the concentration of carbonic acid is many times higher than in rainwater, or even in the carbonated water that people drink.

The study was conducted over a two-year period, noted study co-author Martin Stute, a research scientist at Columbia University's Lamont-Doherty Earth Observatory in New York. In that time, the team monitored the water as it percolated through the rock using monitoring stations placed some distance from the injection site. They detected no CO2.

Even though the process requires a lot of water initially, that water can be recycled, because the other elements in it — the carbon dioxide and the compounds in the rock — are all removed in the reactions that form the carbonates, said Stute. He added that another advantage is that the water needn't be fresh; seawater should work just as well, though that hasn't been tried yet.

The next steps will be conducting more experiments and scaling up, the researchers said.

Both Gislason and Stute noted that the carbon dioxide would need to be transported to pumping sites if projects like this were built commercially, so the technique probably lends itself best to power plants that are close to areas with porous basaltic rock. Gislason said that describes many areas with power plants. "There are opportunities for this in Indonesia, or Japan," he said.

Still, the method offers a possible way to get rid of carbon dioxide quickly and cleanly, he said. "In a sense, you just mimic nature," Gislason said. "Just speeding up the process."

The study is detailed in the June 10 issue of the journal Science.