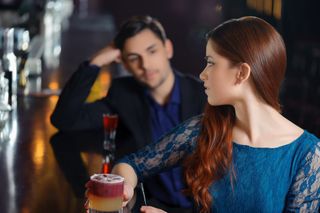 Whether it was in college, after a breakup or during a night on the town, at some point, someone may have told you that hooking up would be good for your love life. But a new study suggests what many people already suspected: Frequent hookups and love-life dissatisfaction often go hand in hand.

"Not all sexual activity is equal. Rather, the nature of the relationship is important," said Wyndol Furman, a professor of psychology at the University of Denver and the senior author of the study, which was published in the April issue of the journal Emerging Adulthood.

Hookups are common among young adults. For example, one study of adults ages 19 and 22 found that 40 percent of men and 31 percent of women said they had engaged in sexual activity with a nonromantic partner during the past year, the researchers said. However, few studies had looked at how sex between people who are not romantic partners might affect people's feelings about their love lives, they said.

In the new study, the researchers surveyed 185 young adults at three points in time after they finished high school: 2.5 years out, 4 years out and 5.5 years out. The participants answered questions about how frequently they engaged in several types of sexual activity in the past year with either a romantic partner, a friend, a casual acquaintance or someone they had just met, or a "friend with benefits." [The 10 Most Surprising Sex Statistics]

In addition, the participants answered questions about their relationship styles, as well as how satisfied they were with their romantic lives, according to the study. Based on the participants' responses, the researchers calculated several scores to assess how each participant ultimately thought about his or her love life.

On the other hand, engaging in more frequent sexual activity with acquaintances, or "hookups," was associated, on average, with some negative ideas about one's love life — in other words, a less satisfying love life, Furman said.

Ultimately, the findings suggest that sexual activity on its own, without factoring in the type of relationship that the activity is occurring within, isn't linked to a happier love life, the study found.

Rather, the type of relationship plays a role: Young adults may feel more positive about their love lives "when sexual activity occurs in tandem with the companionship and intimacy that a romantic relationship offers," the researchers wrote. Alternatively, those who are less satisfied with their love lives may seek out more frequent hookups, according to the study.