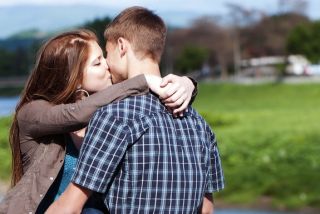 Hooking up? Turns out, about half of college students would judge you harshly for having frequent casual sex.
(Image: © Eugenia-Petrenko, Shutterstock)

College students judge men and women's sexual behavior by a much more equal standard than in the past, but they still frown upon anyone who gets busy "too much," new research finds.

A survey of more than 19,000 college students finds that about half lose respect for people who have sex with "lots of people." Only a minority of students judged the genders differently based on the amount of sex they had.

"Men and women are increasingly judging each other on the same level playing field," study researcher Rachel Alison, a doctoral candidate at the University of Illinois at Chicago, said in a statement. "But gender equality and sexual liberation are not synonymous."

The data came from the 2011 Online College Social Life Survey, which pools survey responses from 22 colleges. Respondents were asked whether they agreed with the statement, "If women hook up or have sex with lots of people, I respect them less." They were also asked the same question about men. [10 Surprising Sex Statistics]

It's possible that the Greek culture of judgment from men foments this gender war, the researchers suggest.

"Women who hold to this reverse double standard are invoking a kind of gender justice," study researcher Barbara Risman, a professor of sociology at the University of Illinois at Chicago, said in a statement. "They are critical of men who treat women badly, and they do not accept a 'boys will be boys' view of male sexuality."

Rounding out the demographic data, the researchers found that Buddhists, Jewish and non-religious students were less likely than Catholics to judge people negatively for their sexual hook-ups. Evangelical or fundamentalists Christian women were 76 percent more likely than Catholic women to judge others' hook-ups.

The researchers will report their findings Monday, Aug. 20 at the American Sociological Associations annual meeting in Denver.