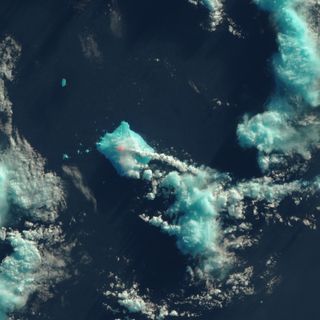 Nobody lives near Mount Sourabaya, but a NASA satellite captured its eruption in the South Atlantic in this false-color image.
(Image: © NASA Earth Observatory image by Jesse Allen, using Landsat data from the U.S. Geological Survey)

For the first time in 60 years, Mount Sourabaya erupted with a spectacular show of fiery lava — in fact, it erupted twice. But there wasn't a single human soul who saw the eruptions live; nobody lives on the volcano's remote island in the South Atlantic Ocean, according to NASA Earth Observatory.

Instead, satellites captured images of the eruptions, which happened on April 24 and May 1, 2016, NASA reported.

Volcanic eruptions in far-flung places, such as the South Atlantic, used to go unnoticed. But the advent of satellites and seismic monitoring has given scientists new insight into volcanic events worldwide, NASA officials said. [Images: Iceland's Blazing Volcano Seen From Space]

"Today, scientists can pick up signatures of events occurring far from any human observers," NASA's Earth Observatory said in a statement.

That's exactly what happened when Mount Sourabaya erupted. The volcano sits on Bristol Island, one of the largest islands in the South Sandwich Islands chain. The archipelago is located about 1,725 miles (2,776 kilometers) southeast of Buenos Aires, Argentina, which is about the distance from Los Angeles to Chicago.

The 3,600-foot-tall (1,100 meters) Mount Sourabaya is a stratovolcano — a tall, conical volcano that's made of volcanic material, including lava and ash. Mount Sourabaya is usually covered in glacial ice and snow, NASA said, which gives a clue as to why nobody lives there.

The Operational Land Imager on the Landsat 8 satellite acquired two false-color images during Mount Sourabaya's eruptions. Both images were compiled from a combination of shortwave-infrared, near-infrared and red light, all of which detect heat gradients.

Each image shows the hottest part of the volcano with a bright red and orange splotch, indicating what is likely hot lava, NASA said. The tall, white plumes show the ash, and the bright blue-green color shows the ice cover on the volcano.

Before now, Mount Sourabaya last erupted in 1956, and it's one of the least-studied volcanoes in the world, NASA said.