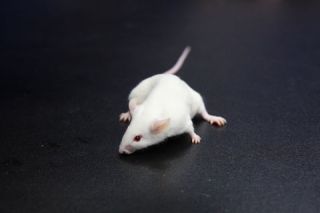 They may not be the talking mice of cartoons, but real mice carry a "humanized version" of a gene thought to be involved in speech, a new study suggests.

The finding could help shed light on how humans evolved language and speech. Mice are often used to study the causes and effects of human diseases because they share many genetic similarities with us.

"In the last decade or so, we've come to realized that the mouse is really similar to humans," said co-author of the new study, Wolfgang Enard of the Max-Planck Institute for Evolutionary Anthrophology. "The genes are essentially the same and they also work similarly."

Enard and his colleagues used this genetic similarity to gain insights the evolution of human speech.

"With this study, we get the first glimpse that mice can be used to study not only disease, but also our own history," Enard said.

Enard studies the genetic differences among humans and our primate relatives. For example, humans have two amino acid (the building blocks of proteins) substitutions on a gene called FOXP2 compared to chimpanzees.

The changes in this gene became fixed after the evolutionary lineage for humans split from the one for chimpanzees. Earlier studies suggest that the human version of the genes was selected for in our hominid ancestors, possibly because it influenced important aspects of speech and language.

People who carry one nonfunctional version of the FOXP2 gene have impairments in the timing of the facial movement required for speech, which suggests that the amino acid substitutions contribute to fine-tuned motor control for muscle movements of the lips, tongue and larynx.

"Changes in FOXP2 occurred over the course of human evolution and are the best candidates for genetic changes that might explain why we can speak," Enard said. "The challenge is to study it functionally."

Which is exactly what the team set out to do with mice.

The researchers introduced the human substitutions into the FOXP2 gene of mice, which is essentially identical to that of chimps.

The mice with the human FOXP2 gene didn't start babbling like babies of course, but they showed changes in brain circuits that have previously been linked to human speech. The genetically altered mouse pups also showed differences in ultrasonic vocalizations they use when placed outside the comfort of their mothers' nests. But not enough is known about mouse communication to read too much into what those changes mean, Enard noted.

The findings of the study are detailed in the May 29 issue of the journal Cell.

More research will be needed to determine the gene's exact effects and how they might relate to differences among humans and chimpanzees.

"Currently, one can only speculate about the role these effects may have played during human evolution," the researchers wrote.

Another study, detailed this week in the journal PLoS Biology, announced the complete sequencing of the mouse genome and found that there are more genetic differences between humans and mice than had been previously thought. One-fifth of mouse genes are new copies that have emerged in the last 90 million years of mouse evolution, the study found.