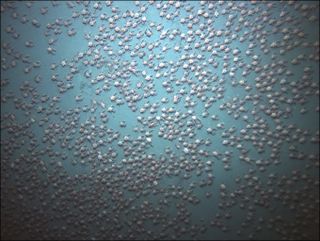 Red crabs (Pleuroncodes planipes) gathered in the thousands in waters off the coast of Panama, captured on video in April 2015.
(Image: © Jesús Pineda et al.)

A strange cloud of disturbed silt in the Pacific Ocean off the coast of Panama unexpectedly led marine biologists to an incredible sight: thousands of red crabs close to the sea bottom that were "swarming like insects," according to the researchers.

The scientists were in a submersible investigating biodiversity at the Hannibal Bank seamount — an underwater mountain and a known ecological hotspot — when they spotted a disturbance in the water that led them to the unusual sight at depths of 1,165 feet to 1,263 feet (355 to 385 meters).

A teeming mass of crabs seethed on the seamount's northwestern flank, with the highest density measured at 78 crabs in a single square meter (about seven crabs per square foot). [Video: Watch Swarms of Red Crabs on Hannibal Seamount]

Red crabs are usually found in Baja California waters, off the northwest coast of Mexico. However, they can be abundant off the coasts of southern and central California during El Niño events, when western Pacific waters are warmer than average.

But they had never been documented this far south, according to the study's lead author, Jesús Pineda, a biologist at Woods Hole Oceanographic Institution (WHOI) and chief scientist on the research cruise.

"To find a species at the extreme of their range, and to be so abundant, is very unusual," Pineda said in a statement. Pineda suggested that the crabs, which are typically found in shallower waters, might have congregated at oxygen-poor depths to steer clear of predators.

Scientists found and documented the swarming crabs in April 2015. Later in the year, a mass stranding of red crabs was reported on a San Diego beach, and genetic sampling confirmed that they were the same species as the crabs viewed at Hannibal Bank. This suggests that the species' usual range may extend farther south than previously suspected, the researchers reported in the study.

While seamounts are known to host a high level of biodiversity, little is known about the processes shaping the wildlife populations that inhabit them. Unexpected sightings like this red crab swarm highlight how much there is yet to detect about how animals in these communities behave, and may inform future studies investigating interactions among species, researchers say.

The findings were published online today (April 12) in the journal PeerJ.