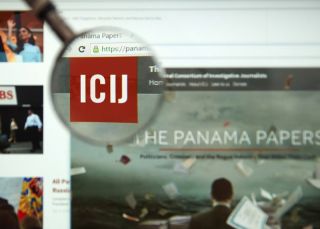 The leak of more than 11.5 million documents from a law firm in Panama that specializes in creating off-shore tax havens for wealthy clients around the world is being dubbed an unprecedented event — the largest leak in history.

More than 100 news outlets around the world have published material based on the so-called Panama Papers. According to journalists at the German newspaper Süddeutsche Zeitung, who first received the leaked documents, the 2.6 terabytes of leaked data consist of emails, photographs, PDF documents, spreadsheets and entries from a company database, some which date back to the 1970s.

The Panama Papers are revealing the extent of wealth hidden offshore from tax authorities by thousands of the law firm's global clients, including businesses, criminals, political leaders, sports stars and celebrities. Information will continue to be released as journalists sift through the massive trove of documents, but at 2.6 terabytes, how big is the biggest leak in whistle-blower history? [The 8 Craziest Intelligence Leaks in US History]

According to Britain’s The Guardian newspaper, the 2.6 terabytes of Panama Papers data are made up of more than 320,166 text documents, 1.1 million images, 2.15 million PDF files, 3 million database excerpts and 4.8 million emails.

But although you could fit that much data on a $100 hard drive these days, it is difficult to comprehend just how much information that is. Here are some rough comparisons, to put that figure into context:

Why so much data?

Until now, most data leaks, such as the documents leaked by WikiLeaks in 2010 about airstrikes in Baghdad and the classified NSA documents released by Edward Snowden in 2013, have been based on one-time releases of data gathered in a relatively short time. But the leakers who had access to computer data at Mossack Fonseca, the Panama law firm, provided the documents to journalists for more than a year, reported the Guardian.

The 11.5 million documents from Mossack Fonseca outweigh the combined size of all the documents leaked by WikiLeaks, the 60,000 files from the 2015 "Swiss Leaks" that exposed a massive tax evasion scheme, the 2014 "Luxembourg Leaks" that resulted in a financial scandal around Luxembourg's tax rulings, and the 2013 "Offshore leaks" that exposed international tax fraud, the Guardian says.

But while the Panama Papers are the largest public-data leak by professed whistle-blowers so far, it may not be the biggest data breach in history.

According to an NSA document leaked by Snowden, Chinese hackers in 2007 stole 50 terabytes of classified data from the U.S. military, including plans for the F-35 Joint Strike Fighter, a next-generation fighter jet. And In the Sony Pictures hack in 2015, a North Korean group called "the “Guardians of Peace" released 200 gigabytes of data but claimed to have stolen a total of 100 terabytes, CNN reported.