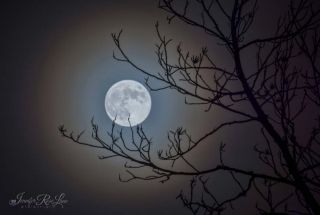 This month, depending on which time zone you live in, the vernal equinox (the first day of spring in the Northern Hemisphere) occurred either on March 19 or March 20. The moon was full on Wednesday (March 23). It was the first one of spring, so it was called the Paschal Moon.

This year, if you have not already noticed, Easter is going to arrive rather early: Sunday, March 27. The date of Easter has a curious link to the moon's phases.

Read on for the official explanation of how the Easter holiday date is determined.

The new moon nearest the vernal equinox is the first day of the Hebrew month Nisan. Then comes the Paschal (full) moon, also known as the Paschal Term, which may fall on the 14th or 15th of Nisan, which also marks Pesach, or Passover.

Traditionally, Easter is observed on the Sunday after the Paschal Term. If the Paschal Term occurs on a Sunday, Easter is moved to the following Sunday. Following these rules, we find that Easter can fall as early as March 22 and as late as April 25. Pope Gregory XIII decreed this in 1582 as part of the Gregorian calendar.

But the rules for determining Easter also state that the vernal equinox is fixed on March 21, even though, worldwide, from the years 2004 through 2103, it actually will occur no later than March 20. Hence, there can sometimes be discrepancies between the ecclesiastical and astronomical versions for dating Easter.

One very outstanding example will happen in the year 2038. In that year, the equinox will fall on March 20, with a full moon the next day. So, astronomically, Easter should fall on March 28 of that year. In reality, however, as mandated by the rules of the church, in 2038, Easter will be observed as late as it can possibly come: on April 25.

To add to the confusion, there is also an "ecclesiastical" full moon, which is determined from ecclesiastical tables that take into account such arcane formulae as Epachs and Golden Numbers.

The dates determined for a full moon using these tables do not necessarily coincide with the dates of the "astronomical" full moon, which is based solely on astronomical calculations. [Moon Quiz: An Easy Quiz for Lunatics]

A proposal has been widely circulated for many years to make Easter closer to being a fixed holiday rather than a movable one, and in 1963 the Second Vatican Council agreed, provided a consensus could be reached among Christian churches. The second Sunday in April has been suggested as the most likely date. But so far, no such consensus has been reached. So our current, somewhat confusing methodology of determining Easter using those rather arcane lunar tables will likely continue, at least for a while.

The date that Easter falls on the fewest times is the absolute earliest day, March 22 (five), closely followed by March 23 and March 24 (seven). In fact, you might remember that in 2008, Easter fell on March 23 — so early that Palm Sunday, which is observed on the Sunday before Easter, was celebrated on the day before Saint Patrick's Day: a calendrical oddity.

For most of human history, the moon was largely a mystery. It spawned awe and fear and to this day is the source of myth and legend. But today we know a lot about our favorite natural satellite, and we think you should, too.

If you were to ask a person to describe the traditional weather you might expect to see for northern climes on Christmas Day, the answer would probably be cold and snowy. Similarly, if you were to ask about the weather on July Fourth/Independence Day, the likely response would be sunny and hot. But how do you respond if you’re asked to describe the “typical” weather for Easter?

The fact that Easter occurs at a time of the year when weather patterns are transitioning from winter to spring, means that the weather can be expected to vary widely, depending upon just when the holiday occurs in a given year.

In 1970, Easter fell on March 29. In that year, a snowstorm hit the northeastern United States. In New York City, the famous Easter Parade had to be canceled, as 4 inches of snow fell, with more than 12 inches accumulating just to the north of the city. It certainly looked and felt a lot more like Christmas!

But six years later, in 1976, Easter fell on April 18, which ended up going down in New York weather annals as the hottest Easter on record. Not only was the 96-degree reading that day the hottest temperature recorded in Central Park that year, it also was the very first (and so far the only time) that New York held the distinction of being the hottest location in the United States!

Which only goes to prove, that sometimes there’s a very big difference between the first day of spring and the first spring day!

Joe Rao serves as an instructor and guest lecturer at New York's Hayden Planetarium. He writes about astronomy for Natural History magazine, the Farmer's Almanac and other publications, and he is also an on-camera meteorologist for News 12 Westchester, N.Y. Follow us @Spacedotcom, Facebook and Google+. Original article on Space.com.