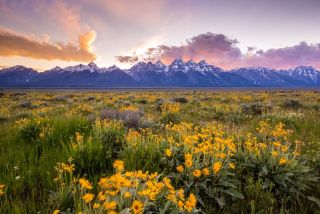 If you're ready to see blooming flowers and sunny skies, it may help to know that this year's spring equinox will be the earliest to arrive in 120 years, largely because of an old rule governing leap years, experts said.

There are two equinoxes (taken from the Latin words aequus for "equal" and nox for "night") each year, marking the start of spring and fall. On these days, there are nearly equal amounts of daylight and darkness.

Usually, the spring equinox happens on March 20 or 21. But the 2016 spring equinox will happen during the very early hours of Sunday (March 20) at 12:30 a.m. EDT, making it the earliest spring equinox since 1896. [6 Signs Spring Has Sprung]

The reason why goes back to Pope Gregory XIII, who created the Gregorian calendar in 1582, according to the website EarthSky. Each year on Earth lasts 365.242 days, and the existing calendar in Gregory's time accounted for this fraction of a day by having most years be 365 days long, with leap years every four years, where were 366 days long.

The year 2096 will have the earliest March equinox of the century, occurring at 10:03 p.m. EDT on March 19, according to EarthSky.

But don't break out the spring gear just yet. Though the equinox is the official start of spring, actual springtime weather varies by location. Plus, it's only springtime in the Northern Hemisphere.

"[The spring equinox] is great for those of us in the Northern Hemisphere, but it also marks an early start to winter for those in the Southern Hemisphere," Paul Cox, an astronomer with Slooh, an organization that connects the public with astronomy, said in a statement.

In fact, Slooh astronomers and The Old Farmer's Almanac will celebrate the spring equinox with live solar views from the Prescott Observatory in Arizona this weekend. They will also show images of the aurora borealis, as seen from the northern latitudes, and discuss the historical and modern cultural importance surrounding the spring equinox.

Go to The Old Farmer's Almanac's website at 5 p.m. EDT on Saturday (March 19) to see the live stream. Viewers are encouraged to ask questions on Twitter by using @slooh.