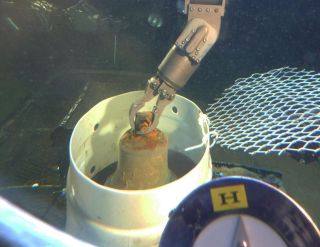 The manipulator arm of HURL's manned submersible places the I-400's bronze bell into a collection basket.
(Image: © HURL/University of Hawaii)

A bronze bell from a sunken World War II-era Japanese submarine was recently recovered off the coast of Oahu, in Hawaii.

The bell was retrieved from the underwater remains of the I-400, an Imperial Japanese Navy mega submarine that was captured and intentionally sunk by U.S. forces in 1946.

The massive vessel was one of the Japanese Navy's Sen Toku-class submarines. At the time, they were the largest submarines ever built. These mega submarines measured more than 400 feet (122 meters) long — longer than a football field — and were designed to function as underwater aircraft carriers, according to the University of Hawaii at Manoa. The subs could carry up to three float-plane bombers and were capable of rising quickly to the surface, launching aircraft and diving back underwater without being detected by enemies. [7 Technologies That Transformed Warfare]

The I-400's bronze bell was recovered earlier this month during a test dive by researchers at the Hawaii Undersea Research Laboratory (HURL), part of the University of Hawaii at Manoa. The researchers used two manned submersibles, the Pisces IV and the Pisces V, to retrieve the historic bell from the sub's watery resting place.

"It was an exciting day for the submersible operations crew of Pisces IV and Pisces V," Terry Kerby, HURL operations director and chief submarine pilot, said in a statement. "Just prior to our test dive, Dr. Georgia Fox [an archaeologist at the California State University-Chico] had received the underwater archaeological research permit from the Naval History and Heritage Command. We had only one chance to relocate and recover the bell."

HURL researchers have been using manned submersibles to hunt for sunken submarines and other historical artifacts since 1992. The I-400 was first discovered in August 2013, sitting more than 2,300 feet (700 m) below sea level off the southwest coast of Oahu.

The Japanese Navy intended to build an entire fleet of Sen Toku-class submarines, but only three vessels were ultimately completed by the end of World War II. At the end of the war, the U.S. Navy transferred five captured Japanese subs, including the massive I-400, to Pearl Harbor.

The submarines were eventually scuttled off the coast of Oahu in 1946, after the former Soviet Union demanded access to the warships under the terms of the treaty that ended the war, according to HURL researchers. The U.S. Navy decided to intentionally sink the submarines, rather than have the advanced technology fall into Soviet hands in the buildup to the Cold War.

Four of the five sunken submarines in this region have since been found, HURL researchers said.

"These historic properties in the Hawaiian Islands recall the events and innovations of World War II, a period which greatly affected both Japan and the United States and reshaped the Pacific region," Hans Van Tilburg, maritime heritage coordinator for the National Oceanic and Atmospheric Administration (NOAA) in the Pacific Islands region, said in a statement. "Wreck sites like the I-400 are reminders of a different time, and markers of our progress from animosity to reconciliation."

The I-400's bronze bell will undergo conservation treatments over the next year, and will subsequently be displayed at the USS Bowfin Submarine Museum & Park in Honolulu.