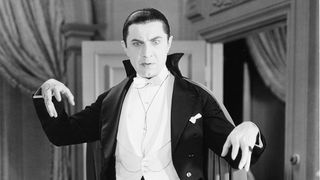 Bela Lugosi, in the bloodthirsty title role for the 1931 film "Dracula," directed by Tod Browning.
(Image: © Courtesy of Universal Pictures)

It's a question that may haunt horror-movie fans and science lovers alike: How long would it take a vampire to drain a person's blood and make "a swift getaway," leaving its victim alive and minimally damaged? A team of university students recently combined vampire lore with the study of fluid dynamics — the physics of how liquid behaves — to find out.

Their findings, timed to commemorate the 85th anniversary of the classic vampire film "Dracula" (1931), were published online in the 2015 issue of the University of Leicester's Journal of Physics Special Topics. The undergraduate journal features peer-reviewed articles written by fourth-year students in the Department of Physics and Astronomy, with submissions representing explorations of physics under conditions that are original and creative.

The student researchers considered how long a vampire could sip from a human host — easily accessed by a bite to the neck — before blood loss would trigger changes in heart rate, based on average blood pressure and the velocity of blood flow in the external carotid artery, the main avenue for blood traveling away from the heart. [7 Strange Ways Humans Act Like Vampires]

The authors wanted to keep the equation relatively simple, with parameters, such as blood pressure, that remained constant. They calculated that a person could lose up to 15 percent of their blood before their heart rate and, in turn, blood pressure, would be affected. Next, they estimated how long it would take for a vampire to drink that amount of blood — and no more — as it freely flowed from a punctured human throat.

Once they estimated the density of the liquid at body temperature and at room temperature, they looked at variations in the speed of flowing blood — from when it first left the heart, to its branching into the common carotid artery and then into the external carotid. Finally, they factored in the size of the two puncture wounds that allowed the blood to escape.

The students determined that it would take 6.4 minutes for a vampire to lap up 15 percent of someone's blood — about 1.6 pints (0.75 liters) from a total volume of 11 pints (5 liters) in the average adult human body.

However, they conceded that if the vampire were actively sucking at the punctures, blood loss would happen faster "and make the process more efficient" — at least from the vampire's perspective.

Practical applications for this particular study may seem elusive; the bulk of its value is as a teaching tool for its student authors, who may one day be science communicators, said Dr. Cheryl Hurkett, a physics teaching fellow at the University of Leicester's Centre for Interdisciplinary Science.

"This is emphatically about communication and a novel way of applying science," Hurkett said in a statement.