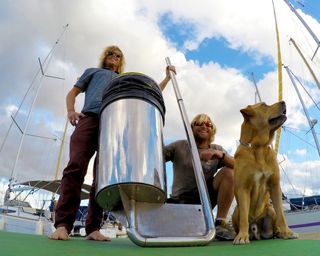 A photograph of the inventors with a prototype of their Seabin device.
(Image: © The Seabin Project)

Two Australian surfers are trying to tackle the planet's water pollution problem head-on, by developing a device that functions as an automated floating trash bin for the world's oceans.

The device, called the Seabin, can be placed in the water, attached to a floating dock in a marina, and is connected to an onshore water pump. The pump generates a flow of water into the container that collects trash and other debris, according to the inventors.

Plastics and other forms of water pollution have become a big problem, according to the Natural Resource Defense Council. Plastics, in particular, make up a significant portion of the stuff floating around in the world's oceans; scientists estimate that 4.4 million to 13.2 million (4 million to 12 million metric tons) tons of plastic washed ashore in 2010, Science magazine reported. That is the same weight as more than 435 copies of the Eiffel Tower all stacked together. [In Photos: World's Most Polluted Places]

The Seabin's inventors, Pete Ceglinski and Andrew Turton, met through their mutual love of water sports, according to the project's Indiegogo crowdfunding campaign, which wrapped up in January. Eight years ago, Turton came up with the idea to create a rubbish bin for the water, Ceglinski told Live Science in an email.

There are a few existing ways to clean up marinas and waterways, the inventors said. One is to use trash boats with built-in nets to scoop up garbage as the boats motor around. Marina workers also walk around and scoop up trash where it gathers in the corners of docks. These methods are effective at removing debris, but they have some drawbacks, Ceglinskiand Turton said.

For one, trash boats are very expensive to operate and maintain, Caterina Amengual, general director of the environment for Spain's Balearic Islands, said on The Seabin Project's Indiegogo page. Marina workers face a similar problem: Their efforts cannot keep up with the amount of pollution in the water, Eli Dana, general manager of Newport Shipyard in Rhode Island, stated on The Seabin Project's Indiegogo page.

Turton and Ceglinski said their initiative could help solve these problems.

The Seabin is an "an automated marina rubbish bin that collects floating rubbish, debris and oil 24/7," the inventors said on their Indiegogo page. The basic design is pretty simple. The device consists of a cylindrical container lined with a natural fiber catch bag and a water pump system with an optional oil/water separator. [Top 10 Craziest Environmental Ideas]

The water pump (run by an onshore power source) would create a flow of water into the bin that carries floating trash with it. These pieces of garbage would get caught in the fiber catch bag (made from a natural fiber called hessian). The water would get sucked out of the bin and up the water pump, and then pumped back into the marina.

"The Seabins will [be] made from polyethylene plastics using a mix of recycled ocean plastics, recycled plastic and new plastic," Ceglinski wrote in an email. "All other components will be materials we [can] reuse or recycle (i.e. aluminum, stainless steel)."

The Seabin Project hopes to have a Seabin production operation in place by the end of this year. Additionally, the group wants to create a small carbon footprint for the product and put a strong emphasis on local production, using sustainable materials in production and finding a way to reuse or recycle the trash collected in the Seabins.

"Eventually, we expect to be reusing all our plastics we have caught and not have it go to [a] landfill," Ceglinski said.

The project's Indiegogo campaign ended Jan. 8 and raised a total of $267,667 — more than 15 percent more than its original goal.