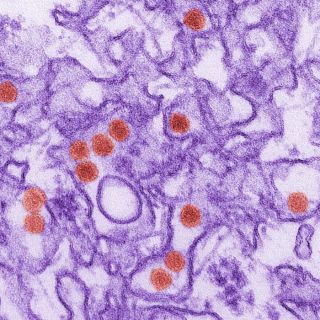 The Zika virus may infect and kill a type of brain cell that is crucial for brain development, according to a new study done in human cells growing in lab dishes.

Although the results don't prove the Zika virus can cause the condition called microcephaly in babies, the findings do suggest where and how the virus may cause damage in the brain, the researchers said. Babies born with microcephaly have underdeveloped brains and may face severe, lifelong developmental disabilities.

However, researchers said more studies are required. "This is a first step, and there's a lot more that needs to be done," study co-author Hongjun Song, a professor of neurology at Johns Hopkins University School of Medicine in Baltimore, said in a statement.

The researchers showed that the Zika virus can infect brain cells, in lab dishes;  however, the researchers still don't know if the same thing happens to cells in a developing fetus that is infected with the virus, Song added.

For the study, the researchers used human stem cells that were engineered to produce cells similar to those that give rise to the brain's cortex in human embryos. The scientists also grew the Zika virus in mosquitoes to imitate a real-life scenario in which the virus is carried in a mosquito before infecting a human. [5 Things to Know About Zika Virus]

Then, the researchers applied the Zika virus to the lab-grown brain cells and found that the virus infected and spread through a plate of these cells within just three days. The virus killed the cells or disrupted their growth.

It is not clear whether the cells could defend themselves against the Zika virus in any way, which means researchers don't know whether or how the virus is being cleared from the cells, the researchers said.

Some case reports about Zika virus infections in fetuses show that although certain brain areas appear to have developed normally, it is mostly the structures of the brain's cortex that are missing, study co-author Guo-li Ming, a professor of neurology at Johns Hopkins University School of Medicine, said in a statement. "So a very important question that emerges from our work is whether the Zika virus specifically targets the neural [cells] mostly responsible for generating the cortex."

Many other questions about the Zika virus also remain unanswered, the researchers said. For example, it is not clear why the symptoms of a Zika infection are so mild in adults, compared to in fetuses, or how the virus enters the nervous system of the developing fetus, they said.

"It is a very exciting result," Joel Stern, an assistant professor of neurology at Hofstra Northwell School of Medicine in New York, who was not involved in the study, said of the new findings. [Zika Virus FAQs: Top Questions Answered]

Although this is an early study, it shows the mechanism by which the virus works in certain cells, he said. And knowing the mechanism of the virus could eventually allow researchers to design strategies to prevent the Zika virus from infecting different types of cells in the brain, Stern added.

However, researchers still need to figure out other aspects of how the virus works in the body, for example, "how the virus crosses the placenta and gets into the fetal brain," he told Live Science.

The new study was published today (March 4) in the journal Cell Stem Cell.