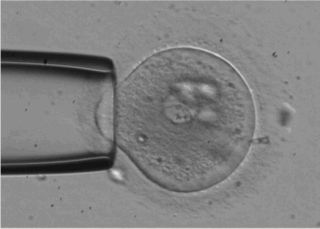 Researchers use a tiny pipette to measure the squishiness of an embryo.
(Image: © Camarillo Labs | Stanford Univeristy)

Much like a piece of ripe fruit, a human embryo has a certain squishiness that could provide fertility clinic staff with clues about its viability, a new study finds.

In fact, the technique of gently squeezing a series of embryos appears to be the most accurate way for researchers to figure out which one to select for implantation, according to the study published Wednesday (Feb. 24) in the journal Nature Communications.

More than 5 million babies have been born through in vitro fertilization, but the process of selecting viable embryos is still far from perfect. Typically, scientists fertilize an egg in a lab dish, and then wait five or six days for it to form a blastocyst, a hollow ball of 60 to 100 cells. Then, scientists examine the rate of cell division in each blastocyst, and choose for implantation the ones that have the best rates.

Sometimes, the scientists also take a small sample of cells from the blastocyst to determine whether it harbors any genetic disorders. This step can place stress on the embryo, however, even though the cells sampled are the ones that form the placenta, the researchers said.

But all in all, the procedure has a 70 percent failure rate. To compensate for the low success rate, doctors often implant more than one embryo. Of course, if two embryos survive, the parents wind up with twins.

"A lot of twins are born because we don't know which embryos are viable or not, so we transfer several at one time," lead author Livia Yanez, a doctoral student of bioengineering at Stanford University, said in a statement. "This can increase the risk of neonatal mortality and cause complications for babies and the mothers."

In the new study, researchers learned about the squishy factor by testing the embryos of mice. They placed a small pipette against one-hour-old mouse embryos and found that viable ones gave a healthy "push back." The technique predicted with an accuracy of 90 percent whether a fertilized egg would grow into a well-formed blastocyst, the researchers found.

After the embryos reached the blastocyst stage, and were transferred into female mice, the researchers found that the embryos with the best initial squishiness were 50 percent more likely to survive to birth than embryos deemed viable using traditional techniques.

The scientists repeated the first part of the experiment with human embryos, and found 90 percent of the embryos with the right squishiness became viable blastocysts. Tests that involve implanting embryos chosen this way into human patients may start soon, the researchers said.

However, it's unclear why squishiness is a good indicator of embryo health, they said. Perhaps embryos that are too firm or too soft have abnormalities that lower their viability, they said.

"It is still surprising to think that simply squeezing an embryo the day it was fertilized can tell you if it will survive and ultimately become a baby," said David Camarillo, an assistant professor of bioengineering at Stanford.