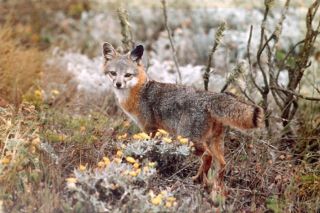 New research shows that mammals with big brains relative to their body size, such as the Channel Island fox, are more likely to be endangered than mammals with smaller brains.
(Image: © National Park Service)

Bigger is not always better when it comes to brains, finds a surprising new study that links brain size to endangerment status in mammals.

The findings, published in the Proceedings of the Royal Society B, completely reverse a trend seen over millions of years.

"For the past 40 million years, carnivore species with larger relative brain sizes were less likely to become extinct, but in mammalian species alive today, we find the opposite trend," author Eric Abelson told Discovery News.

"Modern mammals with large relative brain sizes are more likely to be endangered rather than less," added Abelson, who is a research wildlife biologist at the Pacific Southwest Research Station of the U.S. Forest Service.

Abelson examined the relationship between brain size and endangerment status for 1679 individual animals representing 160 species of different types of mammals. He controlled for body size, since larger animals inherently tend to have larger brains, just as smaller animals tend to have smaller brains.

The Cozumel raccoon, also called the pygmy raccoon (Procyon pygmaeus), was nearly off the charts in terms of its relative brain size, which surpassed that of all other mammals included in the study. This raccoon, however, is critically endangered in its habitat on Cozumel Island off the coast of the Yucatan Peninsula, Mexico.

Clearly these and many other mammals are therefore often unable to think their way out of the daily challenges that they are now facing.

"There is no cognitive solution for the problems faced by non-human mammals living in a forest that is being bulldozed over, or for those that are in a highly polluted stream," Abelson said.

He added, "A larger brain can even be a liability in some cases."

Abelson explained that neural tissue is "very expensive," in terms of the nutritional energy that it requires, not to mention all of its other needed metabolic maintenance.

The correlation between relative brain size and endangerment status is not as strong for very large mammals, however. Abelson is not at present sure why, but he quickly added that the new findings apply to the vast majority of all mammals.

NEWS: During Mass Extinction, No Species Safe. Not Even Us

It could be that only species with the ability to travel easily over long distances and adapt to new environments benefit the most from their costly big brains. Earlier research led by Daniel Sol of the Spanish National Research Council found that birds with big brains, relative to their body mass, show higher survival than smaller brained bird species.

Sol explained that "larger brains help birds respond to novel conditions by enhancing their innovation propensity ... enlarged (bird) brains function, and hence may have evolved, to deal with changes in the environment."

The rate of change affecting animals today is so fast, though, that it appears to be overwhelming many mammals' ability to react and adapt. Time will tell if even our own species is able to cope with such changes in future if current trends, such as rapid climate change, continue.

For now, Abelson hopes that his research will help estimate extinction vulnerability in mammals for which accurate population numbers are not available. As he said, "Brain size holds promise for helping to understand species endangerment because it is an easily measured, heritable trait and has behavioral implications."