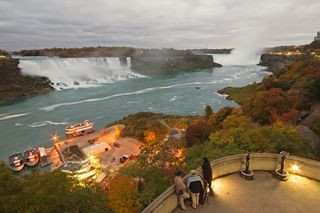 The famous Niagara Falls, found at the border of New York and Ontario. The falls is actually made up of three waterfalls: the Horseshoe Falls, the American Falls and the Bridal Veil Falls.
(Image: © USGS.)

For the first time in nearly 50 years, officials are debating turning off the tap for part of Niagara Falls.

Officials have proposed drying out two of the three waterfalls that make up Niagara Falls — American Falls and Bridal Veil Falls — so that workers can repair the aging pedestrian bridges that span the rapids along the river that feeds the falls. (Horseshoe Falls is the third waterfall that makes up Niagara.) The proposed "dewatering" would do more than provide the curious with a rare chance to see the landscape transformed. It could also yield unprecedented insights into the rock-cutting process that is hidden beneath the flow of millions of gallons of water.

Niagara Falls are "very spectacular aesthetically, but they're not studied a lot geologically," said Marcus Bursik, a geologist with the University at Buffalo, who is proposing to measure some of the changes in the falls if the water is cut off. The new plan could provide a one-time chance to do some of that geological research, he added. [Photos: The Most Famous Waterfalls in the US]

The proposed dry-out would allow workers to fix two 115-year-old pedestrian bridges that provide stunning views of the falls. The two bridges have been deemed too dangerous for people to traverse, and have been closed since 2004, CBC News reported.

The dry-out would take advantage of the fact that a narrow channel feeds both Bridal Veil Falls and the American Falls, which hold just 10 to 15 percent of the total flow over Niagara Falls. (The rest of Niagara's water goes over Canada's Horseshoe Falls.) This feature would enable workers to temporarily plug that channel with something called a cofferdam, an enclosure that would keep water from entering that part of the falls.

"You couldn't do that to the Canadian falls, it's not small enough," Bursik told Live Science.

The flow from the two falls would simply be diverted to the much mightier falls on the Canadian side, he added.

The new project could provide geologists with a rare chance to understand how the rock is cut by the flow of the water. In 1969, engineers did the same thing, and took detailed pictures of the dry rock face. The cofferdam placed at that time spanned 600 feet (183 meters) and used 28,000 tons of rock, according to CBC.

To create detailed maps of the underlying rock, the team would use stereophotography, which produces a 3D photograph; laser ranging, which measures how long light from the falls takes to ping several satellites around the world; or even overhead drones with mounted cameras, Bursik said. The whole process would take at most several weeks, whereas the falls are slated to be dry for months, he added.

These images would then be compared with the 1969 images of the same falls (which were also stereophotographed) to see how the water has carved the underlying rock over the intervening years. In addition, engineers had bolted some of the rock face beneath the falls to prevent it from toppling. The new images could show how well those fixes held up.

For instance, hunks of the rock at the top of the falls occasionally topple off and fall into the pools below. Once the falls are dried up, the team can look at the placement of large boulders and other debris to recreate that toppling process, Bursik said. It could also reveal exactly which path the water takes as it flows over the land, he added.

The map of the falls could also provide generalizable principles for how waterfalls carve out their paths over the land.

"It's absolutely translatable to other waterfalls and other examples, so it's pretty important," Bursik said.