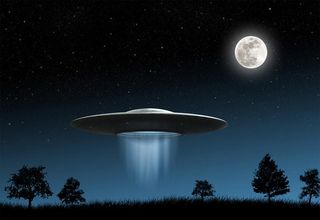 A UFO, or flying saucer, above a dark city and under a full moon.
(Image: © oorka | Shutterstock)

The real-life stories of UFOs would be enough for the fictional "X-Files" FBI agents Mulder and Scully to spend a lifetime investigating.

With a nod to the new "X-Files" reboot (which airs on Fox on Mondays at 8 p.m. ET), the Central Intelligence Agency has released a trove of once classified documents on several real-life unidentified flying objects.

Not surprisingly, many of these UFO sightings emerged in the early 1950s. The space race was on, the Cold War fears had reached a fever pitch, and science-fiction movies like "The Flying Saucer" (1950) catapulted schlocky depictions of aliens and their flying machines into the popular consciousness. In fact, by 1953, UFO mania had reached such heights that the CIA marshaled a team of scientific consultants to investigate all of the reports and review the "Unidentified Flying Object Problem," according to a 1953 memorandum by the agency.

While most of these encounters were likely weird cloud formations, lightning or even missile tests rather than little green men, they still inspire countless conspiracy theories. From the flying frying pan of West Germany to the mysterious craft hovering over uranium mines in Africa, here are some of the CIA's most mysterious X-files. [7 Things Most Often Mistaken for UFOs]

The flying pan of West Germany

In 1952, Oscar Linke, the 48-year-old former mayor of Gleimershausen, Germany, and his 11-year-old daughter Gabriella were traveling home, when his tire blew out near the town of Hasselbach. His daughter noticed something in the distance, which he initially thought was a deer.

When Linke got closer, however, he saw two men peering at what looked like a massive frying pan, between 42 and 49 feet (13 to 15 meters) in diameter, he reported. Around the rim were two rows of holes, each about 12 inches (30 cm) in diameter, and a large, conical tower, about 10 feet (3 m) high, loomed at the top of the object.

When his daughter called back to him, she startled the two men, who immediately jumped inside the mysterious frying pan, according to the CIA report.

One of the men, according to Linke, had a round protrusion on his chest that glowed green and then red. While he was watching, the conical structure fell down to the ground, the saucer began rising in the air and its rim was encircled with flames from below. Then, it turned horizontally and took off above the trees, disappearing into the distance.

"I would have thought that both my daughter and I were dreaming if it were not for the following element involved: When the object had disappeared, I went to the place where it had been. I found a circular opening in the ground, and it was quite evident that it was freshly dug. It was exactly the same shape as the conical tower," Linke testified to a West German judge at the time.

Linke, who had recently escaped from East Germany, claimed he had never heard of flying saucers when in the Soviet Zone. He was convinced that the flying machine was a Soviet military apparatus. Other people in the area reported seeing what looked like a comet at the time. [Flying Saucers to Mind Control: 7 Declassified Military & CIA Secrets]

That same year, in what was then the Belgian Congo (now the Democratic Republic of the Congo), two fiery discs were spotted hovering over the uranium mines in the Elisabethville district, according to a news report from the local newspaper Die Presse.

"The disks glided in elegant curves and changed their positions many times, so that from below, they sometimes appeared as plates, ovals and simply lines," the article said.

According to the article, Cmdr. Pierre, who worked at the Elisabethville airfield, pursued the two flying discs in a fighter plane, but gave up after 15 minutes. He said he estimated the discs were flying at 932 mph (1,500 km/h). The saucer zoomed off, disappearing over Lake Tanganyika. [Supersonic! The 10 Fastest Military Planes]

According to Pierre, the discs were aluminum-colored metal, between 39 and 49 feet (12 to 15 m) in diameter, and had a central knob that seemed to stay absolutely still as the outer disc rotated at tremendous speeds. The outer circumference was "veiled in fire," according to the report. Like the one in the previous report, this saucer seemed capable of flying both vertically and horizontally, and often "shot down" to within a few hundred feet of the treetops. The pilot thought it was unlikely that the mysterious machine was manned, as the disc's erratic motion and high heat would not allow someone to stay inside. (The dubious aerodynamics of such an object were not mentioned.)

Though Pierre is noted as a reliable officer, no one else confirmed his sighting. Based on his report, however, the CIA produced a sketch of the purported saucer's dimensions and potential operating principles.

It turned out that 1952 was a hot year for unidentified-object sightings.

Several people reported seeing lightning-fast objects streaking through the sky over North Africa and Spain. For instance, newspaper reporter Valentín García noticed a smoke trail coming from a strange, rocketlike object flying near Barcelona. After he reported on the object, his office was flooded with calls about the enigmatic object, and one of his friends even captured a photo of the smoke trail, García reported.

And in Morocco, witnesses reported a flying saucer shooting silently through the sky. In comparison, the flights of nearby T-33 fighter planes seemed slow. The object traced a parabola in the sky, paused, and then streaked off toward a town in the south.

The CIA did not release documents to show exactly how all of those investigations were resolved, but other documents suggest that most seem to be hoaxes or misidentified objects.

In a 1953 report by a scientific advisory panel to investigate UFOs, agency officials noted that "the Panel members were impressed by the lack of sound data in the great majority of case histories."

For most of the cases, expert investigators uncovered reasonable explanations for the sightings, and for others, a process of induction suggested similar reports could be dismissed as well, the panel found.