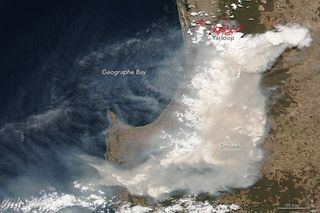 A satellite image of the bushfire at Yarloop, Australia.
(Image: © NASA's Earth Observatory)

Australia rang in the new year with dangerous tidings: Parts of Western Australia have been battling large bushfires since the beginning of the month. The blazes seem to be easing off, but an Earth-observing satellite captured a dramatic view of the fires earlier this month, showing thick clouds of smoke hugging the nation's southwestern coast.

Low rainfall over the past few years had caused unusually dry conditions in the area, which has made it difficult for plants to grow and decay. Plants have been running on minimal moisture and in some cases have died and built up into dry debris. This has made the area more susceptible to fire during Australia's summer, which is prime bushfire season, according to the Australia Government's website. [7 Most Dangerous Places on Earth]

Therefore when lightning strikes landed in a sprawling park called Lane Poole Reserve, the resulting sparks quickly made the dry debris light up like a tender box. Without immediate help on site, the fire kept building as it covered more ground and quickly got out of hand. This quickly led to the fires' spread to Yarloop according to Australian authorities.

The fires killed two Yarloop residents and injured four firefighters, as well as destroyed more than 162 homes and 18 other structures, reported Perth Now, a local news site. As of Jan. 11, the fires had charred 276 square miles (715 square kilometers) of land — an area slightly larger than the city of Chicago.

As of early last week, the fires were calming down and under control. However, authorities are still keeping a close eye on the situation, the BBC reported.

Scientists keep a close eye on pyrocumulus clouds because they can inject smoke and pollutants high into the atmosphere, according to NASA. These pollutants are dispersed by wind and can affect air quality over a broad area. There is currently no indication that air quality over Western Australia has been affected for the long term.