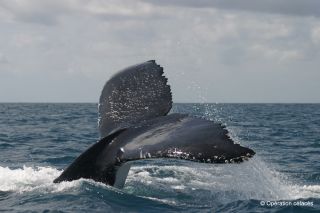 Behemoth whales whose tails are often seen in large numbers slapping the water off Hawaii during the winters have been slow in reaching the Aloha State. Some onlookers had labeled the Hawaii humpbacks as "missing."

Each year, humpback whales return to the Pacific Ocean near Hawaii, Mexico or Central America for their winter breeding, starting as early as August some years and often lingering into May, said experts at the National Oceanic and Atmospheric Administration (NOAA)'s Hawaiian Islands Humpback Whale National Marine Sanctuary (HIHWNMS). This year, the whales showed up in Hawaii later than normal.

"It's an example of the variable nature of Mother Nature," Ed Lyman, resource protection specialist and large-whale entanglement response coordinator for HIHWNMS, told Live Science. Unlike humans, whales don't have calendars, and there are a lot of variables that could cause a later or earlier arrival from year to year, Lyman said. [See Photos of the South Pacific Humpback Whales]

Humpback whales are considered an endangered species by the Endangered Species Act , which means that U.S. law prohibits poaching these animals or coming within 100 yards (approximately 90 meters) of them. Fewer than 10 percent of these plankton-eating animals exist today, and world estimates fall between 35,000 and 40,000 individuals, according to the California-based Marine Mammal Center.

The HIHWNMS and other organizations closely monitor the whales' population to see how it continues to bounce back after being whittled down by excessive hunting, falling to around 6,000 individuals in the early 1990s.

These marine mammals are also well-known for their long migrations. They travel over 3,000 miles (about 4,800 kilometers) between their summer feeding grounds in the northern Pacific Ocean to their breeding grounds near the equator, the sanctuary said. Hawaii usually sees more than 10,000 humpback whales traveling to the area to mate and feed each year between November and May, the sanctuary's website said.

Where did all the confusion come from?

Some initial reports from the Guardian and other media sites suggested the whale numbers were much lower than usual for late December.

"We don't have any empirical data that can verify whether there are fewer whales at this time of year as compared to recent years," wrote Elia Herman, the marine protected species program manager for Hawaii's Department of Land and Natural Resources, in an email to Live Science. "What we do know is that that has been the general impression of some people," she stated.

It is still relatively early in whale breeding season, Herman said, and it's not unusual to see lower amounts of activity until closer to February — the peak of the season.

HIHWNMS also released a statement on Jan. 5, stating that "recent news stories have caused concern about the apparent low numbers of humpback whales appearing this season in Hawaii" and that the sanctuary "would like to clarify some information." The sanctuary went on to say that while the humpback whales were arriving later this year than in recent years, they are now arriving in what local tour operators confirm are "normal numbers."

Once the whales make it to Hawaii, their stay isn't always a blissful vacay: About 30 percent of the humpbacks that breed in Hawaii have shown signs of recent entanglement with fishing gear, according to some new data from HIHWNMS.