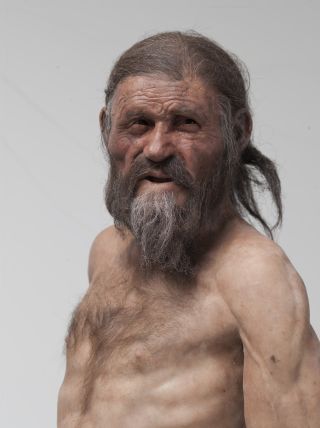 Ötzi the Iceman, a well-preserved mummy discovered in the Alps in 1991, carried an ancient pathogen in his stomach and intestines.
(Image: © Reconstruction by Kennis © South Tyrol Museum of Archaeology, Foto Ochsenreiter)

The famous Ötzi, a man murdered about 5,300 years ago in the Italian Alps, had what's now considered the world's oldest known case of Helicobacter pylori, a bacterium that can cause ulcers and gastric cancer, a new study finds.

It's unclear whether the ancient iceman did, in fact, have ulcers or gastric cancer because his stomach tissue didn't survive. Today, about half of the world's human population has H. pylori in their gut, but only one in 10 people develop a condition from the bacteria, the researchers said.

However, an analysis of tissues from Ötzi's gastrointestinal tract shows that his immune system had reacted to the potentially virulent strain, suggesting he might have felt ill from H. pylori symptoms on the day he died. [Mummy Melodrama: Top 9 Secrets About Otzi the Iceman]

"We showed the presence of marker proteins which we see today in patients infected with Helicobacter," study lead author Frank Maixner, a microbiologist at the European Academy in Bozen/Bolzano in Italy, said in a statement.

The researchers also analyzed the specific H. pylori strain that Ötzi carried. They found that, although it was unique, it was strikingly similar to a strain seen in ancient Asia but not to those in northern Africa as the researchers had suspected.

Hikers discovered Ötzi's mummified body in a glacier in 1991, and his remains now reside at the South Tyrol Museum of Archaeology in Bolzano, Italy. Studies on the Copper Age man suggest that Ötzi likely lived with aches and pains — during his lifetime, he had bad teeth and knees; a genetic predisposition to heart disease; lactose intolerance; arthritis; a possible case of Lyme disease; and wounds indicating that he suffered from an arrow injury and a blow to the head before he died at somewhere between 40 and 50 years old.

Despite these maladies, Ötzi probably would have lived for another 10 to 20 years if he hadn't been murdered, study co-author Albert Zink, the head of the Institute for Mummies and the Iceman at the European Academy, said during a news conference yesterday (Jan. 6).

Needle in a haystack

The researchers were curious about whether Ötzi carried the ancient form of H. pylori, which research suggests has existed in humans for at least 100,000 years.

But the new study was no easy undertaking. The scientists defrosted the heavily tattooed mummy and used an incision made by an earlier inspection of Ötzi to take tissue samples. The team extracted 12 biopsy samples from the stomach and intestine, and analyzed the genetic material from each.

"We had to separate the Helicobacter pylori sequences from the other genetic material," which included the DNA from the iceman himself, food he had eaten, soil bacteria that invaded the body, and other material, study co-senior author Thomas Rattei, the head of the Division of Computational Systems Biology at the University of Vienna in Austria, said at the news conference. "This was like searching [for] a needle in the haystack."

But they did find it. Moreover, Ötzi's H. pylori strain was heavily fragmented because of degradation, providing more evidence that it wasn't the result of modern contamination but rather the actual ancient strain that had infected him during the Copper Age, Rattei said. [Album: A New Face for Ötzi the Iceman Mummy]

After sequencing the ancient H. pylori strain, the researchers compared it to other known strains of the pathogen.

Interestingly, scientists can use H. pylori as a tool to study human migration. The human genome typically mutates slowly over time, but H. pylori mutates quickly. It changes so fast, in fact, that it's usually unique to each geographic population. What's more, if one group of people encounters another — by migrating to a new area, for instance — their H. pylori strains can mix, leaving genetic clues about the mixed strain's background.

Furthermore, these H. pylori strains infect only humans, so it can't be carried by other animals, the researchers said.

"That is why we studied Helicobacter pylori and why it's so important for illustrating all of these wonderful prehistoric human migrations," said co-senior author Yoshan Moodley, a professor in the Department of Zoology at the University of Venda in South Africa.

Modern European H. pylori strains are mixed with those from ancient Europe and ancient northern Africa, but researchers are unsure when the northern African peoples migrated to the continent. They hoped that Ötzi would help them identify when that event occurred, the researchers said.

But they were in for a surprise. Ötzi had very little evidence of an African strain. Instead, his H. pylori was closely related to strains found in ancient Europe and central and south Asia today.

"This would lead us to believe that the population that Ötzi or the iceman strain belonged to must have been the original population that inhabited the stomachs of Europeans 5,300 years ago," Moodley said. "We can say now that the waves of migration that brought these African Helicobacter pylori into Europe had not occurred, or at least not occurred in earnest, by the time the iceman was around … 5,300 years ago."

Of course, Ötzi is just one person, so it's impossible to say definitively that the northern African people hadn't migrated to Europe during his time. But it does offer a small hint, the researchers said.

The researchers plan to study H. pylori more in the future, and are already in talks with experts who study mummies in South America and Asia. Egyptian mummies cannot be included because their stomachs, which would hold any potential H. pylori bacteria, were removed during the mummification process.

The study was published online today (Jan. 7) in the journal Science.