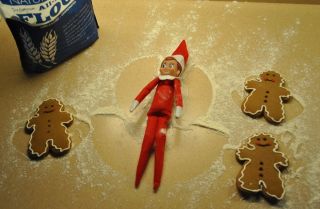 This Elf on the Shelf, named Bob, is up to no good.
(Image: © Julie Liebel)

Ten years ago, a self-published Christmas book launched a new holiday tradition: the Elf on the Shelf. But is this little spy for Santa cute … or creepy?

Pinterest and other social media sites are full of creative images of these toy elves getting into mischief, but not everyone is charmed. In fact, experts say, the Elf on the Shelf could send some less-than-appealing messages on proper behavior, privacy and surveillance.

"Think about it," said Emily Gifford, a psychologist at Child Development Associates in Scarsdale, New York. "He's a tiny, little elf with wide eyes and bulging, shiny, red cheeks that watches you all day taking notes on your behavior. Once you are asleep, he 'flies off' to the North Pole with one goal in mind: to explicitly tattle on you to Santa Claus. … Totally creepy." [Pagan Roots? 5 Surprising Facts About Christmas]

The basic "rules" of the elf game are simple. A family adopts an elf and gives it a name, which endows it with Christmas magic. The elf can't move while it's being observed, but it gets into mischief at night. Parents often post their elf's antics on social media: elves eating all the Advent chocolate. Elves making snow angels in spilled powdered sugar. Elves "pooping" chocolate chips into cookies. [9 Hacks for Making Healthier Holiday Cookies]

The catch is that kids aren't allowed to touch the elf, said Laura Pinto, who researches democracy and education policy at the University of Ontario Institute of Technology in Canada. Pinto argues that the toy sends a negative message to kids about giving up their privacy.

"The elf is like a bureaucrat," she told Live Science. "He's a third party that's the intermediary between you and Santa, collecting information about you."

Making the game strictly observational for kids means that they lose out on valuable opportunities to practice social interaction through play, Pinto said. Santa Claus, of course, has long been positioned as a slightly creepy character, watching kids while they're sleeping. But Santa, Pinto said, is a two-way street. Kids can write to Santa and get a response. They can see Santa at the mall and have a conversation with him. The Elf on the Shelf, on the other hand, just watches and judges.

Pinto has compared the elf with the ideas of English philosopher Jeremy Bentham. Bentham described a perfect prison called the "Panopticon," which would be laid out so that a single watchman could see any prisoner at any given time, without the prisoner knowing he or she was being watched. The elf similarly watches kids around the clock, blurring the lines between play and reality, Pinto has written.

Barbie's in on this game, too. This year, the toy's maker, Mattel, released "Hello Barbie," a doll with an embedded microphone. When children record their voices on this microphone, the recording goes into a cloud-based server. Both parents and Mattel can access these conversations. Similarly, Pinto said, many online games for children require them to submit personal information.

"My concern is that we shouldn't just blindly be like, 'Yeah, it's fine to surrender our privacy to anyone and everyone,'" Pinto said.

Other aspects of the official elf rules trouble child development experts. The elf encourages good behavior not for the sake of being a good person, but for the material reward of Christmas presents under the tree, Gifford said. It's particularly confusing because the elf gets into trouble every night. [The Commercialization of Christmas (Infographic)]

"I think about the contradictory message it sends," she said. "The elf, who is responsible for tracking your good behavior, spent all night spilling the dog food on the floor."

For parents, the elf game comes with pressure to "keep up with the Joneses," Gifford added.

"Allow me a real-life example I have witnessed each of the preceding three mornings this week," she said. "On Monday, Tuesday and Wednesday morning, I found myself at the bus top with my 6-year-old daughter, listening to other parents discuss where the Elf on the Shelf was found that morning, most of them cleverly one-upping each other with Pinterest-worthy examples of their creativity. And then the one, there is always the one parent, who laments that their elf did not move.

"Don't we have enough ways to judge ourselves in the realm of parenting?" Gifford said. [7 Holiday Stress-Busters]

Elf lovers need not despair, though. It's possible to sidestep the potential downsides of the Elf on the Shelf, and many parents do.

"Not all parents play by the surveillance rules," Pinto said. "For some, it's just a toy that does crazy things at night."

She herself has an elf — named, appropriately, Jeremy Bentham. She said she's thinking of having it enter into a correspondence with a friend's elf, named after the French philosopher Henri Bergson.

Hashing out Western philosophy with Christmas toys may not be everyone's idea of a good time, but making the elf your own is a great option, Gifford said.

"I would encourage families to permit kids to be part of the Elf on the Shelf game and have them position or pose the Elf on the Shelf some nights to surprise parents in the morning," she said. And elf alternatives, like Kindness Elves, have already sprung up. These figurines suggest acts of kindness a child can do, or are positioned as if helping around the house to model good behavior.

"It is so important to teach our children to love and feel good about themselves, to offer them lessons that nurture an intrinsic desire to be a good person rather than encourage motivation driven by material rewards," Gifford said. "Get creative and use the Elf on the Shelf to send that message."