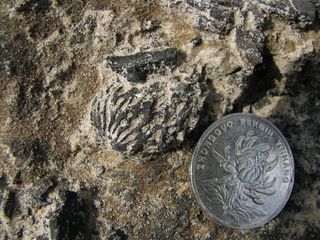 The world's oldest peach fossils have been discovered in southwestern China, according to a new report. At more than 2.5 million years old, the fruits predate the arrival of humans to the region.

Though flattened, the prehistoric peach pits look much like modern ones —oval-shaped with deep grooves and furrows. But they were probably smaller than most peaches found in grocery stores today, measuring barely 2 inches (5 centimeters) in diameter, the researchers said.

"If you imagine the smallest commercial peach today, that's what these would look like," Peter Wilf, a professor of paleobotany at Pennsylvania State University, said in a statement. "It's something that would have had a fleshy, edible fruit around it. It must have been delicious." [Photos: Earth's Most Ancient Organisms]

In 2010, Wilf's colleague Tao Su, an associate professor at Xishuangbanna Tropical Botanical Garden in China's Yunnan province, collected eight peach fossils that were exposed during the construction of a new road near the North Terminal Bus Station in Kunming, the capital of the province.

The fruit fossils were found in a rock layer that dates back to the later part of the Pliocene epoch, the geological period that stretches from 5.3 million to 2.6 million years ago. The pits so strongly resembled living peach pits that Su and his colleagues put the fossils through a battery of tests to confirm that they weren't left there by more recent contamination, perhaps from a hungry construction worker, for example.

By scanning the fossils at Penn State, Wilf and Su discovered that the seeds inside the pits had been replaced by iron and the walls of the pits had recrystallized —marks of old age. The researchers also attempted to date the peach fossils by looking at the amount of decaying carbon-14 they contained —a common way to measure the age of organic remains. But their results showed that the fossils were beyond the range of radiocarbon dating, which is currently about 50,000 years.

Peaches were already thought to be native to China, and historical sources attest that the fruit was cultivated in China for centuries. Peaches are mentioned in the Book of Songs, or Shi-Jing, China's oldest known collection of poetry, with works dating from the 11th to seventh centuries B.C. Evidence of peach eating has also turned up at archaeological sites, such as a Neolithic settlement discovered in Hemudu village, in Zhejiang province, where peach pits that are about 8,000 years old were discovered in the 1970s.

The researchers on the new study, which was published online Nov. 26 in the journal Nature Scientific Reports, think their evidence shows that peaches evolved both under natural selection and later through human domestication.

Peaches were probably an attractive food source for fruit-eating primates, including human ancestors like the extinct Homo erectus and early Homo sapiens who arrived in China during the Pleistocene epoch. The earliest peach eaters might have even helped the plant species spread by inadvertently dispersing seeds through their feces, the researchers said.

"The peach was a witness to the human colonization of China," Wilf said in a statement. "It was there before humans, and through history, we adapted to it and it to us."

Though the researchers think the prehistoric peaches could be assigned to the same peach species living today (Prunus persica), they have proposed a new species name, Prunus kunmingensis, because they are not able to reconstruct the whole plant based on the pit alone.