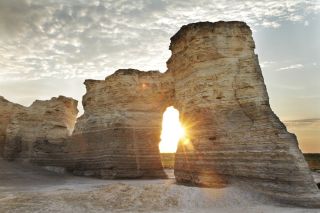 North America rocks. That’s what a new three-part series from "NOVA" shows as it explores the rich history of the continent — from glaciers in Alaska to volcanoes in Hawaii to the crystal-clear waters of the Bahamas.

The host of the series, Kirk Johnson, is a renowned paleontologist and director of the Smithsonian’s National Museum of Natural History in Washington, D.C. Throughout the series, Johnson flies, swims, hikes and rappels around the North American continent, speaking to experts and using (literally) earth-shattering special effects to guide viewers through North America’s billions of years of history. [In Images: How North America Grew as a Continent]

"I think it’s going to be very surprising for people because it’s the biography of the place they live," Johnson told Live Science.

It turns out that the land isn’t, err, set in stone, and the North American continent has been through some pretty drastic changes. "Many of the facts in the show will be new to many people," Johnson said. "Most people will not have considered a time when there was no North America, for instance. What was there before North America? How did it form? When did it start? How did it come together?"

There are three episodes in the series. The first, "Origins," focuses on the forging of the continent itself. In it, Johnson rappels down the Grand Canyon, flies in a helicopter over Hawaiian volcanoes and goes fossil hunting in Alaska to show how titanic geologic forces shaped the actual bedrock of North America. Why are the Rockies so tall? Why does Lake Superior sit on more than 30 miles (48 kilometers) of frozen lava? And what happened to the lost Alps of Manhattan?

In the second episode, "Life," Johnson gives everything a new twist. Now that the North American landscape exists, how did it affect the creatures living there? Why were there so many different kinds of dinosaurs in North America? What do bizarre rocks under the waters of the Caribbean have to do with how we breathe? And what is a 14-foot-long (4.3 meters) fish doing in Kansas?This episode is scheduled to air tonight.

The third and final episode, "Human," adds human beings to the mix. In this episode, Johnson climbs walls of ice and descends into gold mines in the Sierra Nevada mountain range in the western United States, as he explains how early human settlers first arrived in North America; how the California Gold Rush might have never happened if it weren’t for ancient earthquakes; and how clues hidden in dirt along the Washington coast could help residents avoid an unseen, impending disaster. This episode is scheduled to air on Nov. 18.

The history of North America is complex, but Johnson hopes that this series can inspire people to take an interest in the landscapes they see around them every day. "I hope that [this series is] a real eye opener," Johnson said. Maybe it will even get people to — as he put it — dig into the local geology.

Viewers can find episodes, as well as interactive maps and online treks, on the show’s website at PBS.org.