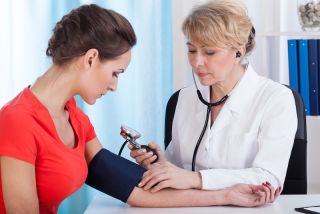 Blood pressure has a tendency to surge in the morning, and this surge is greater in Asian populations than in people in Western countries, said Dr. Satoshi Hoshide, an associate professor of cardiovascular medicine at Jichi Medical University in Japan and the lead author of the study.

Because of this, the morning blood pressure measurement is important, especially in Asian populations, Hoshide told Live Science today (Nov. 8), here at the American Heart Association Scientific Sessions meeting. [7 Things That May Raise Your Risk of Stroke]

The study included more than 4,300 Japanese people who had at least one risk factor for heart disease, such as high blood pressure, high cholesterol or diabetes. For two weeks, the people in the study took their blood pressure at home, measuring it once in the morning and once in the evening. The participants were then tracked for a four-year follow-up period. During the follow-up, there were 75 strokes among the group.

One reason that evening blood pressure readings may be less predictive of stroke risk is that many outside factors can influence blood pressure, including hot baths, warm showers or eating, Hoshide said.

The morning blood pressure surge, on the other hand, is related to physiological factors, including the activation of the sympathetic nervous system, which occurs when you wake up in the morning, Hoshide said.

Hoshide cautioned that the study was done in a Japanese population, so it's unclear if the results can also be applied to other populations.