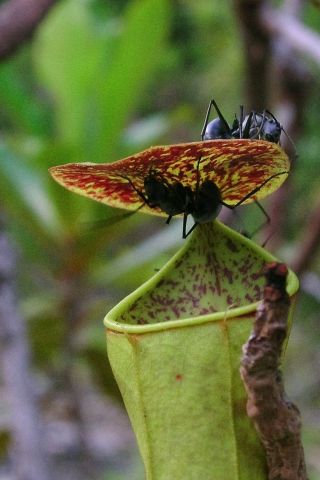 Carnivorous pitcher plants use falling raindrops to force prey to their doom, a new study finds.

This finding suggests that pitcher plants are not merely motionless pitfall traps, but instead actively use rapid movements to ensnare their meals, the researchers said.

All plants can move; — for instance, sunflowers on a windowsill will turn toward sunlight. However, "people usually don't think of plants moving, because they usually move so slowly you need time-lapse cameras to see them move," said study lead author Ulrike Bauer, a biologist at the University of Bristol in England. [See Cool (and Gross) Images of Carnivorous Plants]

"The most exciting thing about our findings is that it represents an entirely new kind of plant movement,"Bauer told Live Science.

Pitcher plants are named after the long, juglike structures the organisms form from their rolled-up leaves. These "pitchers" serve as pitfall traps, containing digestive fluids to drown and liquefy hapless prey — typically insects — that fall in.

The slender pitcher plant Nepenthes gracilis dwells in wet, humid tropical habitats in Southeast Asia. It turns its prey into fertilizer to help the plant survive where nutrients are scarce.

At the top of each pitcher plant is a rooflike lid attached to a flexible hinge. These lids are generally thought to simply act as protective structures, preventing the pitchers from flooding during heavy rain. Now, scientists find that in N. gracilis, the lid also helps the plant trap prey.

Previous research found that N. gracilis produces an unusually large amount of nectar on the lower surface of its lid compared to other pitcher plants. Although insects can walk upside down on this surface to harvest nectar, they regularly get knocked off the lid by the impact of raindrops falling on the lid's upper surface. This causes the prey to cascade down into the pitcher.

Now, using a combination of high-speed cameras and sensitive laser equipment to monitor plant vibrations, scientists discovered that the rigid lid of N. gracilis acts like a springboard, pivoting up and down when struck by raindrops and flicking insects into the pitcher. In contrast, the lids of other pitcher plant species often bend when struck by raindrops, hardly vibrating up and down at all.

Simulated raindrops dislodged 14 out of 37 ants (38 percent) from the underside of an N. gracilis lid. In contrast, not one ant out of 20 fell from the lid of a related Nepenthes rafflesiana pitcher.

The researchers also found that N. gracilis lids possess friction-reducing wax crystals that weaken the grip of insects. The scientists measured the grip strength of ants on N. gracilis lids, finding that the lower surfaces of the lids are just slippery enough to dislodge ants when the lids vibrate. But theses surfaces are still slip-proof enough to permit ants to hold on under calmer conditions, the scientists found. The erratic nature of rain in the pitcher plants' tropical habitats makes such risks highly unpredictable for insects.

At peak speed, the lid of N. gracilis moves at nearly 5 feet (1.5 meters) per second, making it similar to the takeoff speed of a jumping locust and about 10 times faster than a snapping Venus flytrap.

"Some plants can move very quickly. Venus flytraps can snap shut fast, and some plants can disperse seeds, pollen and spores superfast through catapult mechanisms," Bauer said. "But these fast movements require energy. Venus flytraps can take a long time to reopen and need to invest quite a lot of energy to do so, and once catapult mechanisms are released, they're broken and can't be used again."

In contrast, this newly discovered pitcher-plant mechanism "is not only repeatable, but also doesn't require the plants to put any energy in," Bauer said. "They essentially get this movement for free by exploiting the rain as an external energy source."

Bauer and her colleagues detailed their findings online Oct. 5 in the journal Proceedings of the National Academy of Science.