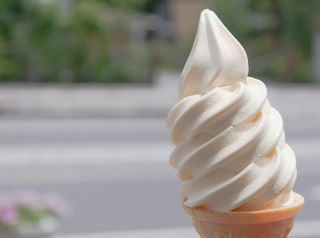 Indulging in an ice cream cone on a hot summer day can be a refreshing but sticky treat. Now, scientists are trying to take some of the mess out of this simple pleasure by developing ice cream that melts slower than conventional varieties.

Researchers from the University of Edinburgh and the University of Dundee, both in the United Kingdom, discovered that a protein called BsIA, normally found in large bacterial communities in structures called biofilm, can be used as an ingredient to keep everything combined in ice cream. This protein changes some of ice cream's usual properties, including making the texture smoother and causing it to be more resistant to melting than conventional products.

The majority of bacteria in the natural environment live within the confines of these biofilm structures, which are clusters of microorganisms in which cells clump together on a surface. The outer structure of a biofilm gains structural stability from a collection of molecules secreted by cells, known as the extracellular matrix. This matrix consists of proteins, polysaccharides and extracellular DNA. [The Mysterious Physics of 7 Everyday Things]

The new study found that BsIA is the protein responsible for creating a hydrophobic coat on the outer surface of the biofilm, which means that it creates an outer layer that repels water like a raincoat, the researchers said. However, the way it creates this raincoatlike surface also allows it to develop a stable interaction that keeps two substances that usually repel one another, such as oil and water, mixed together.

It’s the protein's special binding abilities that make it a perfect substitute for the typical emulsifiers — small, fatlike molecules that keep oil and water mixed — that are used to make ice cream.

"In ice cream, the important interfaces are between fat/oil and water (which really don’t want to mix), air bubbles and water (the bubbles that want to pop, or the air wants to escape) and the surface of ice crystals," study co-author Cait MacPhee, a professor of biological physics at the University of Edinburgh, told Live Science in an email. "Adding our proteins stabilises all of these, and the combined effect is to slow down the melting."

However, the BsIA protein has other potential uses, the researchers said.

"[The protein can be used in] anything where you want to keep things like oil and water mixed," MacPhee said. "It's the same as adding a little bit of mustard to an oil-and-vinegar salad dressing: in that case the mustard acts as an emulsifier." She added that BsIA could be used to keep an oil-and-water salad dressing mixed, or it could be used to keep air bubbles stable in things like souffles or mousses.

While the researchers haven’t actually taste-tested the ice cream made with the BsIA protein, they were able to make some in their lab and have every reason to believe that "the texture and firmness are identical to normal ice cream," McPhee said.

The scientists are now looking to produce the BsIA-laced ice cream as a commercial venture, and they are also investigating new and interesting applications for the versatile protein.

The new study was published online April 28 in the journal Proceedings of the National Academy of Sciences.