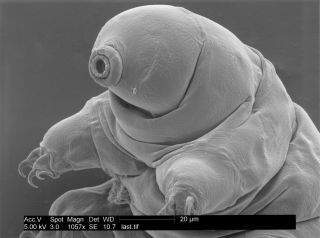 A really weird, really tiny animal — the microscopic tardigrade — is the inspiration behind a new material that could improve the efficiency of things like LED lights and solar cells.

The material under investigation is glass, and tardigrades (sometimes known as "water bears" or "moss piglets") know a thing or two about glass. These water-dwelling critters, which look like tiny blimps with pudgy bodies and eight stubby legs, are capable of shedding almost all of the water in their cells when exposed to extreme conditions, such as heat, cold or even the vacuum of space.

"When you remove the water, they quickly coat themselves in large amounts of glassy molecules," Juan de Pablo, professor of molecular engineering at the University of Chicago and one of the authors of a recent study on the tardigrade-inspired glass, said in a statement. The glassy molecules help the microscopic animals stay in a deathlike state of suspended animation as they float through harsh environments, he added. [Biomimicry: 7 Clever Technologies Inspired by Nature]

The tardigrade's ability to produce glasslike molecules under a wide range of temperatures — they can survive temperatures as high as 304 degrees Fahrenheit (151 degrees Celsius) and as low as minus 328 degrees F (minus 200 degrees C) — led the researchers to experiment with the creation of new glass materials under extreme conditions. And this, in turn, led to the development of a glass material that is almost as strange as the creature that inspired its discovery.

By definition, glasses have an amorphous, or less rigidly defined, molecular structure, than regular, crystalline solids. But the new type of glass created by researchers at the University of Chicago and the University of Wisconsin-Madison defies this definition. Like a crystal, it has a well-defined molecular organization, de Pablo said in a statement.

The new glass, which was described in a paper in the Proceedings of the National Academy of Sciences (PNAS) in March, was produced using a method known as physical vapor deposition. This is a process in which the molecules that will make up the glass are evaporated inside a vacuum and then left to condense, layer by layer, on top of a temperature-controlled substrate, or support structure.

After creating the glass atop the substrate, the researchers analyzed the material using spectroscopic ellipsometry, which measures the way that light interacts with the glass. They found that in some areas within the new glass, the molecules were all oriented in the same way, and, as such, interacted with light in a similar way. [Elementary, My Dear: 8 Elements You Never Heard Of]

Because the structure of glasses is usually random, finding one of these materials that has most or all of its molecules "pointing" in the same direction is rare. And not only is a molecularly structured glass hard to come by, it's also really desirable, according to lead study author Shakeel Dalal, a graduate student at the University of Wisconsin-Madison.

In a post on Reddit's Ask Me Anything (AMA) series, Dalal wrote that, in recent years, researchers who make organic semiconductors using physical vapor deposition — things like light-emitting diodes (LEDs) and solar cells — noticed that they could sometimes produce glass-coated devices with structured, or "oriented" molecules.

"Orientation is great for those applications, because by being able to 'point' the molecule in a direction, you have the ability to improve its ability to carry charge or emit light, for example," Dalal wrote.

When building an LED, getting as much of the light that hits the surface to go "up" and away from the substrate is an engineer's goal. Meanwhile, those who build solar cells want as much light as possible to move "down," toward the substrate, Dalal said.

Until now, semiconductor researchers weren't sure what caused the molecules in glass, in certain instances, to cooperate and point in the same direction. They assumed that certain glass molecules were just better at orienting themselves than others. But the new, tardigrade-inspired research suggests that isn't the case.

The temperature difference between the glass molecules and the substrate where it condensed seemed to drive the orientation of the molecules, the researchers found.

To expand on their preliminary research, de Pablo and colleagues from several institutions in the United States and France recently conducted another series of experimental and model-based tests to see if this temperature finding held true. They found that it does.

"What we have done is to demonstrate that one can create glasses where there is some well-defined organization. And now that we understand the origin of such effects, we can try to control that organization by manipulating the way we prepare these glasses," de Pablo said.

The results of the most recent experiments were published Sept. 1 in the Journal of Chemical Physics.