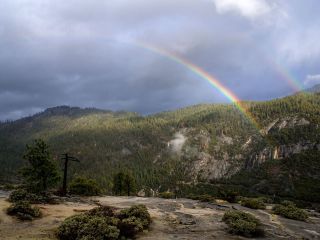 Michael Sainato is a freelance writer who focuses on environmental and race issues. His work has been published in the Miami Herald, The Huffington Post and The Hill. Follow him on Twitter at @msainat1. Chelsea Skojec is a Natural Resources Conservation student in Gainesville, Fl. Sainato contributed this article to Live Science's Expert Voices: Op-Ed & Insights.

Throughout human history, most societies have believed that people and their environment should coexist and that decisions should be in tune with nature. Today, however, industrialized societies' belief systems assert humanity's dominion over nature — an attitude manifested in extensive land development and increasing urbanization that have led to widespread destruction of the natural environment.

Humans are biological animals living in a biological world, one we are deeply connected with and dependent on — and one we are destabilizing. Connections with the natural world are weakening as younger generations increasingly depend on urban life and technology. Children ages 2 to 5 spend, on average, 32 hours each week watching TV, and children ages 6 to 11 average 28 hours of TV time each week. Teens spend more than 7 hours a day consuming media in some sort of capacity. The younger generations are losing their connections with nature, with potentially adverse effects on the conservation efforts that have protected parts of the natural world from destruction. And without their participation, the livelihood of the U.S. National Park Service — the largest U.S. conservation system, with more than 84 million acres of protected land — is in jeopardy.

U.S. conservation is a global concern

According to the United Nations Environment Programme, as of Jan. 31, 2008, the United States had a total of 6,770 terrestrial, nationally designated (federal) protected areas.& These protected areas cover approximately 1 million square miles (2.6 million square kilometers), representing 12 percent of the nation's land area. These lands are vital for protecting America's biodiversity and natural resources.

Future generations must continue to fight to protect and expand these lands for the sake of our planet. Many ecologists subscribe to the half-Earth concept, believing that in order to protect the environment and our planet sufficiently, we must set aside half of the Earth's land surface for wildlife and natural resources to thrive. [Top 10 Most Visited National Parks]

According to the Wild Foundation, the concept is "both a commonsense vision and a practical approach to developing a reciprocal, balanced relationship between people and nature, based on state-of-the-art scientific analysis and time-tested traditional knowledge and wisdom."

As the U.S. National Park Service (NPS) approaches its centennial next year, it recently launched the Find Your Park campaign to remind young Americans of the natural connection they have always had but now are at risk of losing.

Today, the park is a significant portion of the Yellowstone to Yukon wildlife corridor, a nearly 2,000-mile (3,200 km) superhighway, in progress, connecting several national parks and other protected lands for wildlife to flourish.

"We want to expose our nation to their birthright, the national parks, which many people don't even know exist right in their backyard or within a day's drive away," Vela said. With support from the Grand Teton National Park Foundation and Grand Teton Association, the park has been able to raise the bar on offerings to young audiences that simply would not exist without public-private partnerships. Since 2011, Grand Teton National Park has been the home of the National Park Service Academy, producing the next generation of conservation stewards through internship and training programs. The academy specializes in recruiting students from diverse colleges across the country.

"For many of the students, the academy is often their first experience in a national park," Vela said. "Even if they don't use it as a pathway to employment with the National Park Service, we are sending out the next generation of conservation stewards to neighborhoods and communities across the nation."

Recently, through a grant from AT&T through the Grand Teton National Park Foundation, park staff enlisted the support of University of Maryland professors to facilitate workshops for elementary school children to design an app to connect the park with other kids all over the country. In this way, kids are designing technology for kids to connect them back with nature and their cultural heritage.

Florida is one of the most biodiverse states within the United States, but it has also seen an increase in population from fewer than 5 million people in 1960 to currently more than 20 million, with a steady increase of 1,000 new Florida residents added per day. This significant population increase has led to widespread land development and encroachment into Florida's fragile ecosystems.

The gem of Florida's natural world, Everglades National Park, has faced threats from humans for more than 100 years, from the 1904 campaign of then-Gov. Napoleon Broward, who promised to drain them, to the mass hunting of birds in the park for the plume trade — a fashion trend that decimated bird populations for their feathers in the early 20th century. [All Yours: 10 Least Visited National Parks ]

The park was largely saved from development due to the efforts of Marjory Stoneman Douglas, whose 1947 book, "The Everglades: River of Grass," (Pineapple Press, 1997) widely changed the misconception that the Everglades was a worthless swamp.

Everglades National Park is the largest tropical wilderness in the United States and only one of three places in the world that can claim listing as an International Biosphere Reserve, a World Heritage Site and a Wetlands of International Importance.

Today, the park remains under threat from human impacts. However, the largest environmental restoration project the world has ever seen, a nearly $8 billion undertaking, is in progress to ensure South Florida's water sources, its wildlife and its protective buffer are safe from tropical storms, hurricanes and rising sea levels.

"I want people to feel proud of what they have in their backyard and develop a personal sense of ownership and responsibility over it," said Everglades National Park Superintendent Pedro Ramos. "The national parks are part of the story of who we are as a people and as a country. These are places of international significance, and the world is watching to see how well we respond to our responsibility to care for these special natural and historical wonders."

At Great Smoky Mountains National Park, one of the most visited parks in the country, with more than 10 million visitors in 2014, as well as one of the largest protected areas in the eastern United States, Superintendent Cassius Cash is taking what he learned when helping double attendance at Boston National Historical Park and Boston African American National Historic site to focus efforts on connecting the Great Smoky Mountains with young and diverse audiences.

The Great Smoky Mountains region was ravaged by timber harvesting in the early 20th century, but was saved, in large part, to the efforts of journalist Horace Kephart and Japanese immigrant George Masa. The men led a crusade to turn the area into a national park. Philanthropist John D. Rockefeller and President Franklin Delano Roosevelt, inspired by their efforts and those of other ordinary area residents, issued the necessary funds to purchase the lands for the park, officially established June 15, 1934.

"As the National Park Service heads into its 100th year in 2016, it is vital for the future of the parks to deepen our support by connecting with younger generations and groups that traditionally haven't been coming out to the parks," said Cash. He has pledged to hike 100 miles next summer for the park's centennial, getting groups of people to join him on the adventure who represent demographics that haven't traditionally frequented the park. Cash aims to serve as a role model and example to younger generations. "The legacy and success of our work at the National Park Service is not what we've done today, but about how much further it's going to move forward — and that can't happen without younger generations."

"It is so important that people understand how the parks are relevant to their lives. Parks are an expression of who we are as a people and a country," said National Park Foundation President and CEO Will Shafroth.

Shafroth is the great-grandson of Colorado Gov. John Shafroth, who helped author the U.S. Antiquities Act that has been used by U.S. presidents since Theodore Roosevelt to set aside lands for conservation purposes.

"They connect us to our history and culture, they share our proudest moments and our struggles, and they provide space for recreation, relaxation and rejuvenation," he added. "In order for our parks to survive and thrive in their second century, people must feel connected to them and support them."

Humans are drastically changing the world. Populations continue to grow, sea levels are rising, the climate is changing and ecosystems across the globe are constantly threatened by human actions. And yet, humanity is not just defined by wealth, technological progress, architectural development and the resources we need to sustain them; rather, humanity is rooted in nature.

Without protecting and preserving those roots, we lose the context for all that we value. In an age where wilderness is vastly disappearing, it is imperative to the future of our planet that the National Parks are successful in engaging future generations, and in representing the diversity of our country, so the penchant for conservation that has saved our existing National Parks continues to be shared to expand and reaffirm the protection of nature.